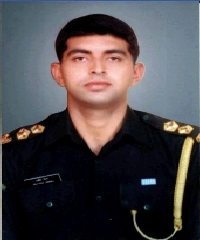 Major Prateek Mishra did his schooling from Seth MR Jaipuria school and later  went to Colvin Taluqdars College and Lucknow Christian College.  Maj Prateek always wanted to join the army since his childhood to serve the nation and joined the Officers Training Academy soon after the college. He got commissioned into 7 Dogra regiment.

Maj Prateek was also inclined towards social service and  had a vision to eradicate child illiteracy from his state. He would often teach and educate children from the nearby slum areas and contributed his time and effort in that area.

Maj Prateek was initially safe inside the bunker as only half of his bunker was destroyed. He managed to escape the impact initially,however, he could see that some of his colleagues were stuck inside the bunker. He would always help out people when they are in need and this time it was no different. He went inside the dilapidated structure and managed to rescue some of his fellow soldiers.

Maj Prateek could see that there were more soldiers stuck in the bunker so he went again and rescued them. He was not so lucky the third time when he went inside as the remaining half of the bunker soon collapsed due to aftershocks, with Prateek Mishra and a few of his colleagues of the Seventh Dogra regiment stuck inside. He could not survive and laid down his life in the service of his men and the Indian army.

His family recalled that Major Prateek Mishra would help anyone who needed it without thinking about his own personal safety. He had put himself in life threatening situations earlier too while helping his friends but managed to get out of trouble. This time he made the ultimate sacrifice in the highest traditions of the Indian Army.