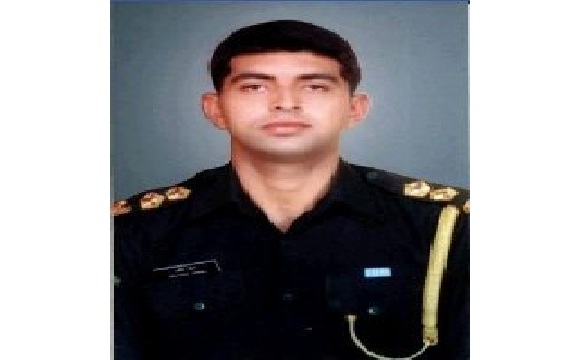 Place of birth : Lucknow, UP

Major Prateek Mishra hailed from  Lucknow in Uttar Pradesh and was born on 11 May 1979. Son of Shrimati Reshma Mishra and Shri Pradeep Mishra, he had a sister Smita as his sibling. He did his schooling at Seth MR Jaipuria school and later went to Colvin Taluqdars College and Lucknow Christian College.  Maj Prateek always wanted to join the army since his childhood and continued to follow his dream.  Eventually after his graduation, he got selected to join the army by clearing the Combined Defence Services Examination. He joined the SS 74 course at the Officers Training Academy Chennai for the rigorous officers' training. He got commissioned as a Lieutenant into 7 Dogra battalion of the Dogra Regiment, an infantry regiment known for its gallant soldiers and numerous battle honours.

He soon evolved into a committed soldier and a fine officer with commendable field-craft skills. Besides being a tough soldier, he was very affable and caring which endeared him to his peers and subordinates as well. Maj Prateek was also inclined towards social service and had the vision to eradicate child illiteracy from his state. He would often teach and educate children from the nearby slum areas and contributed his time and effort to that cause.

During 2005, Maj Prateek Mishra's unit was deployed in Uri sector of Jammu and Kashmir. Besides manning the forward posts, the unit troops were engaged in operations against the terrorists on a regular basis as the unit's area of responsibility (AOR) was active with militancy. The area was also prone to infiltration, which necessitated regular armed patrols to check any infiltration from across the border. On 08 Oct 2005, Maj Prateek Mishra and his troops were deployed at one of the forward poots of the unit in Uri sector. Unfortunately on that day, a devastating earthquake hit parts of India and Pakistan and claimed many lives in both countries. Though the epicenter of the earthquake was in Pakistan, it also affected parts of Jammu and Kashmir.  Uri, the place where Maj Prateek's unit was deployed, was among the worst affected areas in Jammu and Kashmir.

The earthquake destroyed a part of the bunker where Maj Prateek and his men were positioned. Maj Prateek was initially safe inside the bunker as only half of his bunker was destroyed. Though he managed to escape the impact initially, he noticed that some of his soldiers were stuck inside the bunker. He would always help out people when they were in need and this time it was no different. Without caring for his own safety, he immediately swung into action and rushed inside the dilapidated structure to rescue some of his fellow soldiers. Maj Prateek could see that there were some more soldiers stuck in the bunker so he went again and rescued them.

However he was not so lucky the third time as when he went inside the third time, the remaining part of the bunker soon collapsed due to aftershocks. Maj Prateek Mishra got trapped under tons of debris and could not be saved. Displaying courage, devotion to duty and camaraderie of a very high order, Maj Prateek Mishra made the supreme sacrifice in an effort to save the lives of his troops. Maj Prateek Mishra proved to be a valiant soldier and an officer par excellence, who led from the front and laid down his life in the service of the nation, following the highest traditions of the Indian Army.