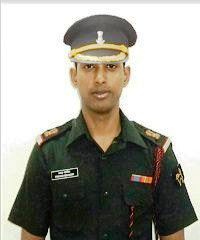 Major Prasad Mahadik hailed from Virar city of Mumbai district in Maharashtra. Son of Shri Ganesh and Smt Sharda, Maj Mahadik graduated from Bhawans College, Andheri in  Mumbai and then joined the army after passing the Combined Defence Services Examination. He joined the Officers’ Training Academy in Chennai (SSC-93 Batch) and was commissioned on 17 March 2012,  into 7 Bihar of the famed Bihar Regiment known for its brave soldiers and various battle honours. After a couple of years of service, as a Captain, he got married to Gauri on 15 Feb 2015.

Major Prasad Mahadik after serving in various operational areas was posted to the unit in Arunachal Pradesh in October 2017. By 2017, he had put in about  5 years of service and evolved into a committed soldier and an officer par excellence. He also had gathered experience of participating in numerous counter-insurgency operations during his short service career. Besides being a tough and dedicated soldier, he was an excellent sportsman and a music lover who could play guitar with ease.

During 2017, Major Prasad Mahadik’s unit was deployed in Tawang valley, which was located about 35 Km from the  Indo-China border in Arunachal Pradesh. He was stationed at a forward post along the border at a height above 15,000 ft from mean sea level where the temperature falls as low as -15 degrees. On 30 December  2017, around 6.30 AM a fire broke out in the barrack where Major Prasad lived and soon engulfed a major part of the building.

A rescue operation was launched by the unit but it failed to contain the fire in time. Major Prasad Mahadik got trapped badly and got severe burn injuries before he could be rescued. He later succumbed to his severe burn injuries and a committed soldier was lost in the horrific accident. Major Prasad Mahadik was a fine officer and a true soldier who laid down his life in the service of the nation.