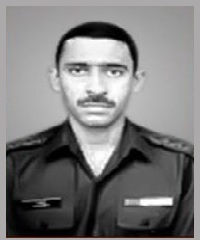 Maj Padmapani Acharya was born on 21 June 1968 in an Air Force family originally belonging to Odisha, but settled down in Hyderabad, in Telangana. Maj Acharya was married to Charulatha, who was pregnant with Aparijita, their daughter when her husband was martyred in 1999. Major Acharya’s father, Wg Cdr Jagannath Acharya, is a former wing commander of the Indian Air Force and had served during 1965 and 1971 wars with Pakistan.

Maj Acharya’s brother Padmasambhav Acharya was a captain in the Indian Army in 1999 and was a part of Operation Vijay in Kargil. Mrs. Vimala Acharya, the mother of Major Acharya, is a social worker and recalls her son as a jovial person and a voracious reader.

Just a week after his birthday, on June 28, 1999, Indian Army’s 2nd Rajputana Rifles was assigned the task to take possession of the enemy bunker at the Tololing Top as it was a dominant position overlooking the Srinagar – Leh Highway (NH 1D). The success of the battalion hinged on the early capture of this position. The Battle of Tololing was thus, one of the pivotal battles in the Kargil War.

Unfortunately, the assault company suffered a large number of causalities owing to heavy artillery attack by the enemy forces. But this didn’t deter Maj Acharya from going ahead with his assigned mission. Unmindful of his own safety, Maj Acharya took the reserve platoon and led it through raining bombardment. Some of his men were seriously injured but he continued to encourage them and charged at the enemy with the remaining soldiers. He himself crawled up to the enemy bunker and lobbed grenades. When he was severely injured and unable to move, he ordered his men to leave him and attack the enemy while he continued to fire. After a night-long fierce hand-to-hand battle, the battalion succeeded in recapturing Tololing top, thus turning the course of Kargil War. Maj Acharya, however, succumbed to his injuries after completion of the mission.

On 28 June 1999, Major Padmapani Acharya as a Company Commander, was assigned the formidable task of capturing an enemy position which was heavily fortified, strongly held and covered with mines and sweeping machine gun and artillery fire. The success of the battalion and brigade operation hinged on the early capture of this position. However, the company attack almost faltered at the very beginning when the enemy’s artillery fire came down squarely on the leading platoon, inflicting large numbers of casualties. With utter disregard for his personal safety, Major Acharya took the reserve platoon of his company and led it through raining artillery shells. Even as his men were falling to the murderous enemy fire, he continued to encourage his men and charged at the enemy up the steep rock face with his reserve platoon.

Unmindful of the hail of bullets from the enemy’s position, Major Acharya crawled up to the enemy position and lobbed grenades. In this daring assault, he was seriously injured. Despite heavy injuries and unable to move, he ordered his men to leave him and charge at the enemy while he continued to fire at the enemy. The enemy position was finally over-run and the objective was captured. He, however, succumbed to his injuries after completion of the mission.

Major Padmapani Acharya displayed exceptional courage, leadership and spirit of self-sacrifice in the face of the enemy.

Maj Acharya’s quote in his last letter to his father, “Combat is an honor of a lifetime and I would not think of anything less. What better way to serve the nation”.

What his family has to say about him…

He last spoke to his family on June 21, 1999 which happened to be his birthday. Ironically this turned out to be the last time he spoke to his family. Seven days later, on June 28, 1999, the family of Major Padmapani Acharya received a phone call from the Army saying that he had fought bravely in Kargil and was no more.

He had posted a letter dated June 19, 1999 to his father, Wg Cdr Acharya, which is shown below. 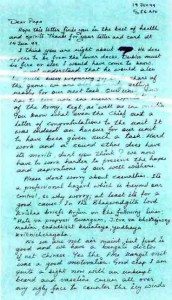 In the letter, Major Acharya had also talked about Prime Minister Atal Bihari Vajpayee’s visit to Kargil. His father sent a copy of this letter to the prime minister, who replied to him acknowledging Major Acharya’s sacrifice.

During the gallantry award investiture ceremony in New Delhi on Republic Day, which Wg  Cdr Jagannath Acharya attended to receive the Maha Vir Chakra, Prime Minister Vajpayee came up to him and again thanked him for the letter. He also asked then President K R Narayanan to come up to Major Acharya’s father to meet him.

It has been 20 years since you left us, giving it all in the line of your duty. The nation lost a great soldier and we lost-an inseparable part of our family. It has been…20 years of waiting for you to come back home on leave… 20 years of not having seen you, touched you and heard you… 20 years of talking to you only through our hearts and minds…

Not a day passes when I see your daughter, Bubbles and not think of you. Thank God, you left a piece of yourself for us to lean on, to alleviate our sorrow, make us laugh, feel loved and more so to handle life without you. I remember hearing her heartbeat for the first time when we took Charu for the scan; it was after you had left for the other world. I remember the tears welling up in our eyes and rolling down by just imagining it to be your heart beat (of course it was and of course she is).

Our lives are still being guided by your memories, that are filled with your playfulness, your outlook towards life, your sense of responsibility and the values you stood for…..and we are reliving those precious moments while bringing up and loving Bubbles. At times, it appears as if you had a premonition and thus planned your exit from this world. Your meeting with Charu, your letters back home, your conversations and finally Bubbles…seem to indicate that.

We are proud of you but sad and angry too. Though left with a sense of loss and void, we have taken it in our stride and moved on; after all, we are a soldier’s family. Ma said,” a soldier never dies, he just moves on”. Babloo, you are really the “Maha Vir”, the country looks up to, for your courage, gallantry and patriotism. You are indeed the pride of the nation.

As a family, we are immensely proud of you but miss you too in equal measure. Undoubtedly you remain an inspiration for the family and the nation as well; and your life though short has left an inspirational message for all Indians… follow your hearts, to pursue all the dreams with passion and make the country proud…..Jai Hind!