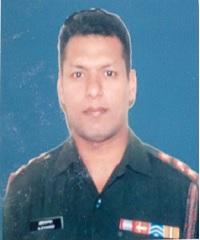 Major P Alexander joined the Army in 1999 and was commissioned into the Bihar Regiment, a regiment known for its gallant soldiers and numerous battle exploits. Maj Alexander served in various operational areas during his service and honed his field craft skills required for an infantry officer. He developed into a committed soldier and a fine officer who commanded the respect of his troops.

During 2007, Major P Alexander’s unit was deployed in Gurez sector in J & K. The troops of the unit were manning the forward posts on the LOC. The area was prone to infiltration by the militants form across the border and demanded high level of alertness from the soldiers. The prolonged deployment in remote and inaccessible areas with hostile weather conditions often led to high stress levels among the soldiers. On 23 July 2007, one soldier of Major P Alexander’s unit under very strange circumstances went berserk and took four of his comrades as hostage.

Major P Alexander assessed the situation and decided to intervene to diffuse the tension. However, the soldier displaying abnormal behavior turned the gun towards Maj Alexander and shot him. Maj Alexander later succumbed to his injuries and a fine officer was lost in this tragic incident. Maj Alexander was a true soldier and an officer par excellence who lost his life in the line of his duty under very unfortunate circumstances.

Maj P Alexander is survived by his wife Sherine Alexander and two children.