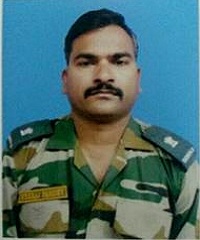 Place of Birth: Gorakhpur, UP

Major Neeraj Pandey hailed from Gorakhpur in Uttar Pradesh. Son of Shri Ravindra Nath Pandey and Smt Saroj Pandey, Maj Neeraj was keen to join the Armed Forces right from his younger days. He followed his dream and joined the Army  on 7th June 2008. He was commissioned into the Corps of Signals, an important arm of the Indian Army which handles its military communications. The Corps has the responsibility of providing reliable and responsive communications to the Army under harsh terrain and tough battle field conditions in consonance with its motto, “Teevra Chaukas” meaning “Swift and Secure”.

By 2016, Maj Neeraj had put in around 8 years of service and had worked in various operational areas including the conflict zones. He had developed into a committed soldier and professionally competent officer who commanded the respect of his seniors and men under him as well. After serving for few years with various units he was deputed to serve with the Assam Rifles deployed in the North East for counter insurgency operations. Maj Neeraj Pandey got married to Ms Sushmita and the couple had a son Rudransh in July 2013.

During 2016, Maj Neeraj Pandey was serving with the unit of Assam Rifles deployed in Arunachal Pradesh on Indo-China border. The militancy affected areas of the state fell in the area of responsibility of Maj Neeraj’s unit and thus the unit personnel had to maintain a high state of alert at all times. On 17 Mar 2016, Maj Neeraj was assigned an operational task and consequently had to move along with his men in a convoy to the stipulated location. However when his convoy reached Cipra, in Arunachal Pradesh it was hit by a land slide.

Maj Neeraj got badly injured and later succumbed to his injuries. Maj Neeraj was a dedicated soldier and a fine officer who laid down his life in the service of the nation. His brave wife Smt Sushmita followed into the footsteps of her husband and joined the Army in the year 2018 into the Corps of Signals, the same corps her husband had served. Maj Neeraj Pandey is survived by his father Shri Ravindra Nath Pandey, mother Smt Saroj Pandey, wife Smt Sushmita, (now serving as an officer in Indian Army), son Rudransh, sister Mamta and brother Deepak.