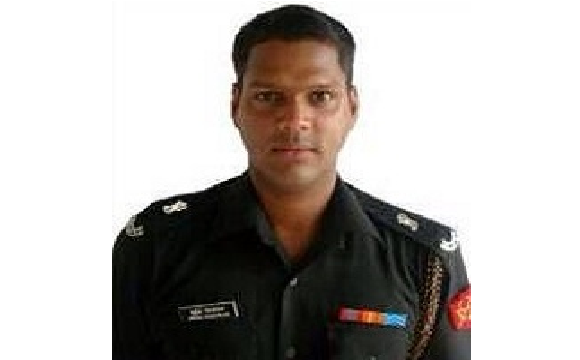 Major Mukund Varadarajan was born on 12 April 1983 in Kozhikode district of Kerala.  Son of Shri R Varadarajan and Smt Geetha, he grew up in Tamil Nadu and had two sisters Swetha and Nithya as his siblings. He received his Bachelor of Commerce degree from Sri Chandrasekharendra Saraswathi Viswa Mahavidyalaya at Enathur in Tamil Nadu and a diploma in journalism from the Madras Christian College, Tambaram. His grandfather and two of his uncles also served in the army and that motivated Maj Mukund to join the army. He got selected to join the Army after clearing the Combined Defence Services Examination in the year 2005 and moved to the prestigious OTA (Officers'  Training Academy) Chennai.

He was commissioned as a Lieutenant in 2006 into 22 Rajput battalion of the Rajput Regiment, an infantry Regiment well known for its dauntless soldiers and numerous battle exploits. in 2006. After serving for nearly three years, he got married his longtime friend Ms Indhu Rebecca Varghese on 28 August 2009 and the couple had a daughter Ashreya born on 17 March 2011. He served at the Infantry School in Mhow, Madhya Pradesh and was also a part of United Nations Mission in Lebanon. In December 2012, he was deputed to serve with 44 RR Battalion, deployed in J&K for counter insurgency operations.

During 2014, Maj Mukund’s unit 44 RR was deployed in the Shopian district of J & K and was engaged in counterinsurgency operations on a regular basis. The battalion with Col Amit Singh Dabas as its Commanding Officer had its headquarters at Zawora Manlo near the apple town of Shopian. After joining his unit, Maj Mukund participated in a number of counter-insurgency and counter-infiltration operations and proved his mettle on various occasions. On 25 Apr 2014, information was received from the intelligence sources about the presence of some hardcore terrorists including Jaish-e-Mohammed commander Altaf Wani in Qazipathri village in Shopian district. It was decided to launch an operation to flush out the terrorists under the leadership of Maj Mukund Varadarajan. As decided Maj Mukund swung into action along with his troops and reached the the suspected area with in 30 minutes. The intelligence information also suggested that the same terrorists were responsible for killing election officials 24 hours earlier.

At around 1500 hrs, Maj Mukund split his QRT(quick Reaction Team) into 6 buddy pairs and set up a cordon the suspected two-storey house in Qazipathri village. The suspected house had a spacious compound with an orchard and two outhouses. The troops soon made contact with the heavily armed terrorists, who opened fire at the assault team on being challenged. The exchange of fire raged for an hour but there was no headway, as the terrorists were hiding and firing from the vantage points. Sensing the gravity of the situation, Maj Mukund realized that some other operational tactic had to be employed to make a breakthrough. Maj Mukund and his buddy Sep Vikram Singh under the covering fire from other men, dropped to their bellies and crawled to the entrance of the house. Maj Mukund quickly using an IED(Improvised Explosive Device) blew up the entrance of the house and charged into the house along with Sep Vikram Singh. in a swift action Maj Mukund shot and killed one terrorist, simultaneously directing the fire of his troops.

The remaining two terrorists then threw grenades and using the cover of debris bolted out of the house towards the cement outhouse. Maj Mukund and Sep Vikram Singh followed them and threw a grenade inside the outhouse. The resultant blast killed one terrorist but Jaish-e-Mohammed commander Altaf Wani survived who fired at Sep Vikram Singh. He received two bullets in the neck and jaw and was grievously injured. He soon succumbed to his injuries and was martyred. Maj Mukund without pausing and caring for his safety, lunged forward and sprayed bullets on Altaf Wani killing him instantly. However during the heavy exchange of fire, Maj Mukund too received three gunshots and soon collapsed. He was immediately rushed to the Army's 92 Base Hospital at Srinagar, but Maj Mukund lost the battle for life on the way and breathed his last in the arms of the regimental medical officer.  Maj Mukund Varadarajan was a committed soldier and gritty officer, who laid down his life at the age of 31 years in the line of his duty Maj Mukund was given the nation’s highest peacetime gallantry award “Ashok Chakra” for displaying valor beyond the call of duty and supreme sacrifice.  Major Mukund achieved the distinction of being the fourth recipient of the “Ashok Chakra” from the state of Tamil Nadu. The previous "Ashok Chakra" award winners from the state are Second Lieutenant P.M Raman of Tiruvannamalai district (1957, posthumously), Major Dinesh Raghu Raman of Kancheepuram district (2008, posthumously) and Major D Sreeram Kumar of Madurai district (2010).