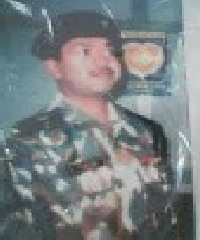 Major Mukesh Chaurasia was born in Jamalpur, Bihar on 10 August 1976. He got commissioned in the Eastern Command Liaison Unit. He was part of the army intelligence corps. He was married to Meera Prasad.

The north-eastern state of Assam is under a unified command where the army, police and paramilitary agencies work in tandem to counter militancy in the state, which has claimed more than 10,000 lives in the past two decades. The biggest threat is from the ULFA among other entities and it requires all the three security agencies to work together efficiently.

The Assam police took up a counter insurgency operation at Nakhongia in Dibrugarh district in the northern part of the state. Mr Bharat Hazarika from the village had received an extortion note from the ULFA that they would send two of their men to collect a ransom from him. He had apparently informed both the local police and the army about this. The police personnel dressed like civilians were waiting at the residence. At the same time, Major Mukesh Chaurasia along with Sepoy Bikash Sensowa came to the residence dressed as civilians, to gather information about the extortion network of the ULFA. The cops mistook them to be the militants and surrounded them. They opened fire on the two army personnel, who succumbed to the wrath of the bullets. Their identities were known when the police personnel secured identity cards from the pockets of the deceased militants. It was a clear case of mistaken identity and miscommunication between the army and the police department. The police dreaded the incident and District Deputy Commissioner H N Bora ordered a magisterial enquiry into the incident. The army too launched a separate enquiry but the lives of the great martyrs were lost.