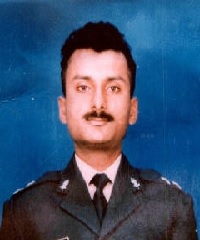 Major Mohan Gangadharan was born on 11th Feb 1961 in a military family to Lt Col K G Gangadharan(Retd) and Smt Sarojini Gangadharan. Besides his father, his brother and co-brother too served in the Army. Maj Mohan did his schooling from Saint Francis, Lucknow and Saint Edmund College, Shillong. He then went on to study engineering from REC, Surathkal, now known as NIT Surathkal in Mangalore in civil engineering stream.

After his graduation, Maj Mohan, true to his family tradition, joined the Army, through the Indian Military Academy on 18th December. He was commissioned into 59 Engr Regt of the Corps of Engineers, the Corps that provides all the engineering services to the Indian Army during peace as well as war. Apart from being a committed soldier, Maj Mohan had keen interest in sports and excelled in many disciplines. Besides being a champion basketball player, a swimming champion and a coach, he was the best sharpshooter of his regiment in the Army.

On the fateful day of 24th Feb 1999, Maj Mohan was Post Commander at Shankarbasti Post in Naugong District of Assam, operating under 311 Mountain Brigade, under Operation Rhino. In the evening Maj Mohan’s unit had received intelligence report that a group of militants were holed up at Jainkhan village. Maj Mohan immediately rushed to the village with the Quick Reaction Team and placed a cordon around the village. A group of three armed militants on a motorbike tried to flee the cordon in the cover of darkness. Using their guns they laid down a curtain of bullets to facilitate their escape.

Unmindful of the deadly barrage, Maj Mohan charged through with his gun blazing and brought down one militant called Pratap, hitting him in his leg. Pratap was a self styled Area Commander of the action group of Karbi National Volunteers. During this armed conflict Maj Mohan received bullet injuries in the right arm and chest and fell down. Despite being severely injured and blood pouring out of his wounds, Maj Mohan got up undeterred and resumed the charge, with the gun now in his left hand. Maj Mohan’s bullets found their marks and Pratap was killed and then he turned his attention to the other two militants too. Maj Mohan was still firing when he finally collapsed and was martyred. Due to the exemplary courage and leadership displayed by Maj Mohan, the other two militants were captured and a huge cache of arms was seized.