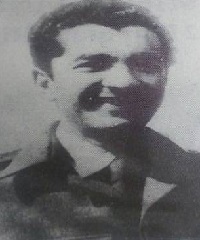 Major Mohammed Ali Raaz Sheikh was born on 6 March 1931 and hailed from Gandhinagar District in Gujarat. He belonged to a princely family form Mangrol in Gujarat and completed his early education in Rajkot. Subsequently he got selected to join the Indian Military Academy, Dehradun and joined the Army at the age of 23 years. He was commissioned as a Second Lieutenant on 6th June 1954 into 16th Light Cavalry of the Armoured Corps, the combat arm of the Indian Army equipped with various types of tanks. By the year 1965, he had put in over 10 years of service and had been promoted to the rank of Major. By then he had served in various operational areas and had developed expertise in armour operations.

During 1964-65, Major Sheikh was serving as Aide-De-Camp (ADC)  to Gen JN Chaudhuri, then Chief of Army Staff (COAS). When he reverted to regimental duty in 1965, war clouds were already looming large in the horizon. Consequently 16 Lt Cav got deployed on the western border as per the operational plan. Major Sheikh was given command of A Squadron, when the 16th Light Cavalry was tasked to lead the advance of the Indian Army’s 1st Armoured Division into Pakistan territory on 8 September 1965. The regiment, after crossing the IB at first light on 8 September 1965, formed the spearhead of the 1st Armoured Division advance into enemy territory. Moving with lightening speed, brushing aside minor opposition and without any care for his personal safety, Major Sheikh led his squadron along with other sub-units of 16th Light Cavalry and hit Gadgor village by around 0900 hours.

Between 0930 hours and 1430 hours, fierce tank to tank engagements ensued in which 16th Light Cavalry, including Major Sheikh’s squadron, destroyed eight enemy Patton tanks, two RCL guns and some of the enemy infantry. The enemy, comprising a squadron of Pakistan’s 25 Cavalry as it was found later, was located in well concealed positions around Gadgor village which halted the regiment’s advance temporarily. While B Squadron tanks went on engaging the enemy armour through the Gadgor position up to the outskirts of Phillora, A Squadron under the command of Major Sheikh was ordered to outflank the enemy location from the South-West. During this manoeuvre, Major Sheikh, while leading from the front, was the first to draw enemy tank fire and was mortally wounded.

Unmindful of his personal injuries, Major Sheikh, who was a determined combat tank Commander, continued leading the advance with speed and momentum, fully realizing that this move by his Squadron was critical to the success of the regiment’s overall advance into enemy territory. During this action, Major Sheikh was hit in the neck and right shoulder and was severely wounded. Major Sheikh was evacuated and shifted to the Army medical facility for the treatment. However on 12 Sep 1965, he succumbed to his injuries and attained martyrdom.

On the 8th September 1965, Major Mohammed Ali Raaz Sheikh, who was in command of a Squadron of an Armoured Brigade in the Sialkot Sector in Pakistan, was ordered to outflank an enemy force from the east of Gadgor to cut it off. Another Squadron of the Regiment, advancing up to Gadgor had contacted a Squadron of enemy armour and infantry in well prepared and concealed positions. As Major Sheikh advanced about 3000 yards, he also contacted enemy armour which was supported by dug-in recoilless guns. He at once ordered deployment of his Squadron and himself took up position beside the leading troop. A fierce tank battle ensued, in which Major Sheikh himself took a prominent part and destroyed two enemy tanks. He was hit by an enemy shot and was severely wounded. Even so, he kept on engaging the enemy till he was evacuated to a hospital where he succumbed to his injuries. The exemplary courage and leadership displayed by Major Mohammed Ali Raaz Sheikh were in the highest traditions of the Indian Army.