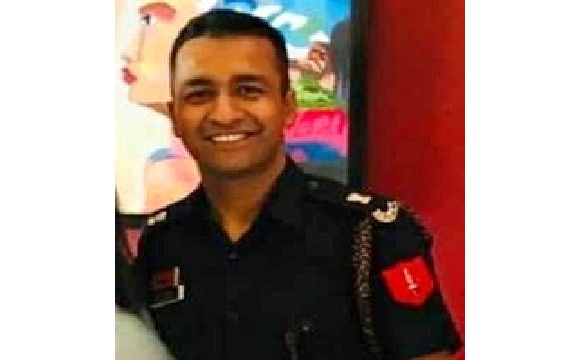 Major Mayank Vishnoi hailed from Meerut in Uttar Pradesh. Son of an army veteran Subedar Virendra Vishnoi and Smt Madhu Bishnoi, he had two sisters Tanu and Anu as his siblings. He did his schooling from Kendriya Vidyalaya Punjab Lines Meerut and was inclined to join the armed forces since his childhood like his father. After his schooling he got selected for TES (Technical Entry Scheme) of Indian Army and got trained at OTA Gaya. Later he went to Cadet Training Wing at Mhow, for three years of degree course. Eventually he passed out from OTA Gaya as a Lieutenant in the year 2013 at the age of 22 years.

He was commissioned into the Rajput Regiment, an infantry Regiment known for its valour and battle honours in various operations. After serving for few years, he got married to Ms Swati from Himachal Pradesh on 18 April 2018. He got promoted to the rank of Major in the year 2019. After serving for sometime with his parent Regiment, he was deputed to serve with 44 RR battalion, deployed in J&K for counter-insurgency operations.  .

During August 2021, Maj Mayank Vishnoi’s unit 44 RR was deployed in Shopian district of J & K, and was involved in operations against the militants on a regular basis. By August 2021, Maj Mayank had completed nearly two years in the unit and had already taken part in many successful operations. Maj Mayank was a gallant soldier and gritty officer who led from the front and inspired his fellow soldiers. He was awarded "Sena Medal" for his commendable display of raw courage, camaraderie and devotion to duty. On 27 Aug 2021, Maj Mayank Vishnoi participated in yet another such operation in Shopian district of J&K.

On the late night of 26th  August 2021, Maj Maj Mayank’s unit received information from the intelligence sources about the presence of terrorists in its AOR(Area of Responsibility) in Shopian district. It was decided to launch an operations against the terrorists and deal with the threat. As planned the assault team led by Maj Mayank reached the suspected area and launched the search and cordon operation. While the operation was underway, the troops of 44 RR came under attack from the terrorists, firing from vantage points. A fierce gun battle ensued thereafter with heavy exchange of fire. During the exchange of fire, Maj Mayank got shot in the head and was severely injured. He was evacuated for medical treatment to the Military Hospital at Udhampur. However after battling for life for 14 days, Maj Mayank succumbed to his injuries and was martyred. Maj Mayank Vishnoi was a brave and committed soldier, who laid down his life at the age of 30 years in the line of his duty, living up to the highest traditions of Indian Army.