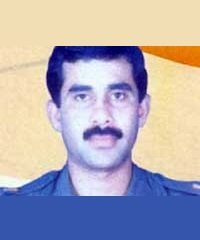 Major Muthanna was born on 12th July 1964 in Chettimani village, near Bhagamandala town in Madikeri taluk of Kodagu district in Karnataka.  He joined the Officers Training Academy in Chennai in October 1984 and was commissioned into the 5th Battalion of Sikh Light Infantry Regiment, a regiment known for its valiant soldiers and various battle honours since its raising in the Indian Army.

In the year 2000, Maj Muthanna’s unit was deployed at Khanabal in Anantnag district of Jammu and Kashmir. The unit was located in a remote Army Base  near Srinagar, along the main National Highway of Kashmir. On 12th of Jan 2000 at around 6 PM, the Army Base was attacked by four militants , who were armed with AK-47s, grenades and rocket launchers. The heavily armed militants forced themselves into the barracks and began to fire indiscriminately. Though it was a surprise attack, the troops rose to the occasion and retaliated appropriately, killing one militant and wounding another. However, the remaining two escaped unseen into a small, two-storey building nearby.

The attack stopped for a while but the militants’ were still hiding and their location within the camp was unknown. Maj Muthanna in consultation with his commanding officer immediately swung into action and cordoned off the suspected area. The militants were finally spotted in the building, across the road, which had only one entry-point and a stairway. It was decided to storm the building and two soldiers were tasked to carry out that operation. However the soldiers were shot at by the militants and were cornered. At that moment, Maj Muthanna realized the gravity of the situation and decided to storm the building himself in order to save his fellow men.

Maj Muthanna quickly entered the building and provided cover to the two injured soldiers while they were taken away to safety. In the meantime, he shot dead one of the two militants, but in the process he sustained a bullet injuries. A grenade hurled at him also exploded in his face, badly injuring him. Maj Muthanna later succumbed to his injuries and was martyred. The troops subsequently eliminated all the militants and the building was taken over by 3.30, in the wee hours of the morning. Maj Muthanna was given the gallantry award “Shaurya Chakra” for his outstanding courage, steadfast resolve and supreme sacrifice.