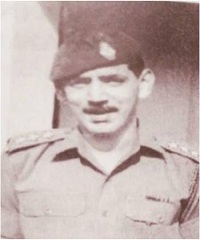 Major Lalit Mohan Bhatia was born on 5th May 1945, in Calcutta, West Bengal. Son of Mr P N Bhatia, Maj Lalit Mohan Bhatia was commissioned into 15 Rajput of the famed Rajput Regiment, a regiment known for its gallantry and various battle honours. During 1971 Indo-Pak war, Maj Bhatia’s unit was deployed in Fazilka sector in Punjab.

During Dec 1971, Maj Lalit Mohan Bhatia’s unit was deployed in Punjab in the Fazilka sector. On the night of 13th December 1971, Major Bhatia’s unit was  given the task of capturing a Pakistani outpost in the Fazika Sector. Major Bhatia was assigned that vital task, who immediately swung into action along with his company troops. Major Bhatia using his field craft skills tactically moved his company towards the objective. However as the post was very critical for the enemy, it was heavily defended.

As Major Bhatia moved closer in a tactical move, his troops came under fire from enemy light and heavy automatic weapons. Undeterred by the enemy fire , Major Bhatia led his troops from the front and gave a befitting reply. He realized that an enemy LMG post was seriously threatening the advance of his troops and needed to be silenced at any cost. Major Bhatia decided to lead the charge at the LMG bunker himself and attacked it with all his might. He killed two enemy soldiers and finally succeeded in neutralizing the LMG bunker. He even had to engage in a hand to hand fight during the process.

However, Major Bhatia got seriously injured during the  hand to hand combat and later succumbed to his injuries. Major Bhatia was martyred but his raw courage and exceptional leadership motivated his troops to carry on with the mission with double vigour. His men in a daring action attacked the enemy troops and succeeded in capturing two enemy tanks. They also recovered a large quantity of arms and ammunition and captured Pakistani soldiers as prisoners including two officers.

On the night of the 13th/14th December 1971, Major Lalit Mohan Bhatia, who was serving with a Battalion of the Rajput Regiment,  was given the task of capturing the Pakistani outpost in the Fazika Sector.  As he maneuvered his company on to the objective, it came under cross fire of light and heavy automatic weapons.  Undeterred, he led the charge, bayoneted two Pakistanis and  silenced the light machine gun bunker. In hand to hand fight, he received fatal injuries due to enemy bayonets. His personal example inspired his company to victory capturing two enemy tanks and a large quantity of arms and ammunition, equipment and prisoners including two officers.

In this action, Major Bhatia displayed gallantry, leadership and devotion to duty of a high order.