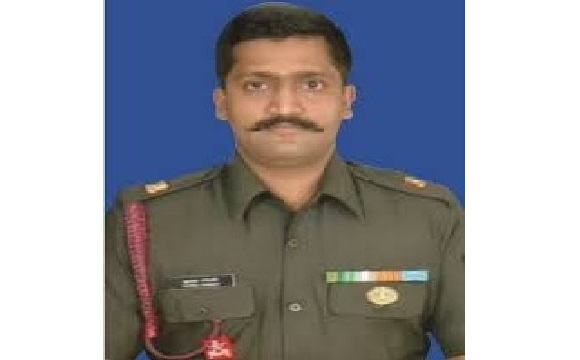 Major Kunal Munnadir Gosavi hailed from Pandharpur in Solapur district of Maharashtra. Major Kunal did his schooling from Kavathekar High School in Pandharpur and graduated from the Brihan Maharashtra College of Commerce in Pune. Major Kunal had a strong desire to join the armed forces right from his childhood. He continued to nurse the dream and got selected through the combined defense services examination to join the army after his graduation.

Maj Kunal joined the Army in 2006 and was commissioned into the 166 Medium Regiment of the Regiment of Artillery. After serving for a couple of years, he got married to Miss Uma in 2009  and the couple had a daughter Umang. During 2013-14, Major Kunal served in the trouble-torn Manipur region and was part of many counter-insurgency operations.

During Nov 2016, Major Kunal was serving with 116 Med Regt based at Nagrota in J&K.  On the fateful day of 29th November a group of heavily armed terrorists attacked his Artillery unit at about 5.30 am in Nagrota and killed four soldiers. Thereafter the terrorists entered two residential buildings, in an attempt to cause more casualties. Three terrorists took over vantage positions in two residential buildings that housed officers' families and a Mess. Major Kunal on being informed about the attack immediately swung into action and activated the unit's Quick Reaction Team(QRT). Leading the team Major Kunal reached the site and moved the injured soldiers and family members to safety. Major Kunal and his troops cordoned off the area to safeguard the soldiers and their families in the residential area. In the meantime Maj Akshay Girish Kumar of the nearby 51 Engineering Regt and his unit’s Quick Reaction Team(QRT) also reached the site. The soldiers of CRPF too reached the site to provide support to the army.

However during the exchange of fire, Major Kunal received a bullet and got seriously injured. But undeterred he continued to direct his soldiers to fight the terrorists. Major Kunal was then moved to the bunker of CRPF and then shifted to the ambulance. However on the way to the hospital, Major Kunal succumbed to his injuries and was martyred. Major Kunal Gosavi and his team not only engaged the terrorists and prevented the evil designs of the terrorists to take hostages and massacre innocents, but they also ensured that the terrorists could not spread out in the camp area and harm important military assets.

However during the operation, besides Major Kunal Gosavi, six other soldiers made the supreme sacrifice which included Major Akshay Girish, Hav Sukhraj Singh, Naik Chittaranjan Debbarma, Lance Naik Kadam Sambhaji Yeshwantrao, Grenadier Raghavendra Singh and Rifleman Asin Rai. Major Kunal Gosavi was a gallant soldier and a gritty officer who led from the front like a good military leader. He was given the gallantry award, “Shaurya Chakra” for his unshakable courage, leadership, and supreme sacrifice.