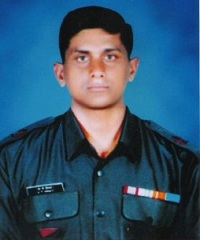 Major Kumandur Prabhakar Vinay was born on 18th March 1977 in Bangalore. Son of Shri K R Prabhakar and Smt Jaishree Prabhakar, Maj Vinay was studying in 9th class in Delhi Kannada School when the family moved to Hyderabad. Maj Vinay was inclined to join the armed forces since his younger days and followed his dream after completing his school education. He got selected to join the prestigious National Defence Academy in 1994. He was commissioned into 53 Med Regt of the Regiment of Artillery in 1999 and got posted to the Kashmir valley as his first assignment. As a young Lieutenant, he got the opportunity to participate in operations during the Kargil war.

Besides serving with his parent unit 53 Med Regt, he also served with 37 Med Regt and later was deputed to serve with 34 Rashtriya Rifles battalion deployed in Kashmir for anti-insurgency operations. By 2007 Maj Vinay had completed nearly 8 years of service and had gathered substantial operational experience. He was slated to get married on 29th Oct 2007 and his family members were looking forward to the occasion, but the destiny had something else in store for him.

During 2007 Maj Vinay was serving with 37 RR battalion deployed in Baramulla area of Kashmir valley. On 02 October 2007, Maj Vinay along with Maj Dinesh Raghu Raman was assigned the task of launching an operation in a village in Baramulla to flush out the terrorists hiding there. On the early morning of 2nd October 2007, after getting the information about the movement of the militants, Maj Vinay leading a team of soldiers rushed to Tanmarg in Baramulla district. Soon the troops made contact with the terrorists who fired at them on being challenged. a fierce gun battle followed thereafter lasting for several hours. The terrorists started firing indiscriminately to break the cordon and flee but Maj Vinay and his troops foiled three such attempts.

The heavy exchange of fire continued intermittently for more than 36 hours, during which a total of nine ultras were eliminated. However, during the exchange of fire, Major Vinay was hit by the enemy bullets on his head and chest. He later succumbed to his injuries and was martyred. Maj Vinay was a committed soldier and a fine officer who led from the front like a good military leader. He was given the nation’s second highest peacetime gallantry award, “Kirti Chakra” for his unshakable courage, unyielding fighting spirit, and supreme sacrifice.