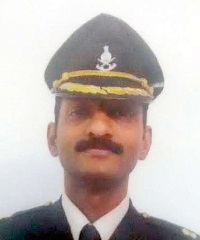 Major K. Manoj Kumar, hailed from Haripad in Alappuzha district of Kerala. Maj Manoj Kumar belonged to the arm of Army Ordnance Corps(AOC) of the Army and had served in various army units during his service career. The Army Ordnance Corps is responsible to provide logistics support to the Indian Army during war and peace. Its role is to make available all kinds of stores to all army units at the right time, in right quantity, at the right place and right cost. The inventory of AOC covers every conceivable requirement of the soldier from clothing to weapons, from a needle to a tank and also all munitions except fuel, fodder and medicines.

During 2016, Maj Manoj Kumar was serving with Central Ammunition Depot, Pulgaon. The Central Ammunition Depot (CAD) Pulgaon, located about 115 km from Nagpur, is spread over an area of more than 7,000 acres and stores a variety of ammunition and explosives in a large number of sheds. The CAD functions directly under the Army headquarters and is responsible for the all-India supply of ammunition and explosives, after receiving them from Ordnance factories and other sources. The CAD then supplies these items to various ammunition depots and field ammunition depots for replenishing their stocks.

On 31 May 2016, an accidental fire broke out in one of the sheds of CAD Pulgaon at around 01:30 AM in the early morning. Consequently, various teams were pressed into service on a war footing to contain the fire. Major Manoj Kumar and Lt Col Ranjit Singh Pawar along with others made valiant attempts to contain the fire in order to minimize the damage and could succeed in restricting  it to only one shed with the help of fire fighting teams.

However the horrific accident involving multiple explosions claimed the lives of Major Manoj Kumar and Lt Col Ranjit Singh Pawar who faced the unexpected event gallantly like true soldiers. Along with the two officers 15 soldiers of Defence Security Corps (DSC) also lost their lives. Maj Krishnan Manoj Kumar was given the gallantry award, “Sena Medal” posthumously for his act of courage, unfaltering leadership and supreme sacrifice.

Maj Krishnan Manoj Kumar is survived by his wife, son and a daughter.