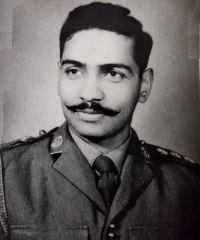 Arm/Regt: Brigade of The Guards

Maj K K Rao was born in a village called Kallianpur in the South Kanara district of Karnataka to Sri Appaji Rao and Smt Sundari Bai.

Maj KK Rao was commander of D Coy of 8 Guards which attacked Morapara around 1.30AM on 23 Nov 1971. Around 1.00AM the leading 2 Companies A and B assaulted Morapara under Maj HD Manjrekar and R. Nath. There were heavy casualties on both sides, Maj Manjrekar was martyred. The second assault on Morapara commenced around 1:30 AM under the command of the unassuming Maj K K Rao. They had to wade through waist-deep water, booby traps, wire obstacles and mines. Although wounded initially, he continued to lead his brave men. As he destroyed a bunker he was struck by machine gun burst. The courageous Maj K K Rao refused to be evacuated and while urging his men  to move forward  died in the first battle of Hilli on the night of 22 Nov 1971.

He was awarded the Sena Medal posthumously for his gallantry.