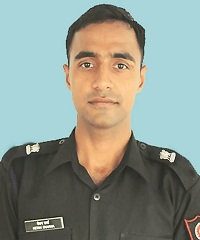 Major Ketan Sharma hailed from Meerut in Uttar Pradesh and was born on 4th October 1987. Son of Shri Ravindra Sharma and Smt Usha Sharma, Maj Ketan had an inclination towards the Armed Fores since his younger days. He continued to pursue his dream and got selected to join the Army after passing the Combined Defence Services Examination. After passing out from the Indian Military Academy Dehradun, he joined the Army in the year 2012 at the age of 25 years. He got commissioned into the Corps of Engineers, one of the oldest arms of the Army manned by combat engineers.

After commissioning, he was posted to 57 Engr Regt. Subsequently, he got promoted to the rank of a Major and after serving for few years with his parent unit, he was deputed to serve with 19 RR battalion. Maj Ketan Sharma got married to Ira Mandar Sharma in 2013 and the couple had a daughter Kiara.

During 2019, Maj Ketan Sharma‘s unit 19 RR was deployed in Anantnag district in J & K for counterinsurgency operations. As the area of responsibility of the unit was insurgency prone area, the troops had to maintain a very high level of alert at all times. Maj Ketan had taken part in a number of operations in his stint of around two years with the battalion. On 17 Jun 2019, the security forces had received information from the intelligence sources about the presence of some hardcore militants in Bidoora village in Achabal area of South Kashmir’s Anantnag district. After analyzing the information, it was decided to launch an operation to neutralize the militants.

Accordingly, a joint operation was launched on 17 Jun 19 along with elements of 19 RR, CRPF, and J & K Police. Maj Ketan was part of 19 RR element that formed the joint team. As planned the joint team reached the suspected area and launched the cordon and search operation.  As the search operation was underway, the militants sensing the danger fired at the troops in a bid to escape. A fierce gun battle ensued thereafter with a heavy exchange of fire from both sides. Maj Ketan and his team managed to kill one militant in the gun battle and continued to engage other militants to thwart their attempt to escape. However, during the exchange of fire Maj Ketan got hit by a bullet on his head and was seriously injured. His two other comrades too got injured during the operation and were shifted to the hospital. However, Maj Ketan later succumbed to his injuries and was martyred.

Maj Ketan Sharma was a valiant soldier and a fine officer who led his men to from the front like a good military leader. He displayed courage, leadership, and comradeship of a very high order during the operation and laid down his life in the service of the nation. Maj Ketan Sharma is survived by his father Shri Ravindra Sharma, mother Smt Usha Sharma, wife Smt Ira Sharma, daughter Kiara and younger sister Megha.