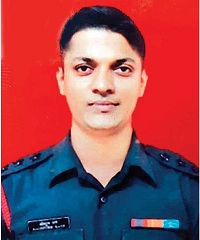 Major Kaustubh Prakash Rane hailed from Thane district in Maharashtra and grew up in Sheetal Nagar area of Mira Road. Though his family originally belonged to Sadure village in Vaibhavwadi taluka of Sindhudurg district in Maharashtra. Maj Kaustubh Rane completed his schooling in Mira Road’s Holy Cross Convent High School and after his higher secondary education from Shri L P Raval college, he graduated from Shailendra College in Dahisar. Known to be a well-mannered and intelligent boy since his childhood, Maj Kaustubh was determined to serve the country as an Army officer.

After completing his education he cleared the combined defense service examinations and was commissioned as an officer from the Chennai-based Officers’ Training Academy (OTA) in 2011. He joined his unit in Kupwara in J & K as a young lieutenant and then got promoted to the rank of captain in 2011. He then got posted to a peace area in Kolkata and then back to a field unit in J & K. Maj Kaustubh got promoted to the rank of Maj in the early 2018 and was serving with 36 RR battalion during that time.

During 2018, Maj Kaustubh Rane’s 36 RR battalion was deployed in the Gurez sector in J & K and was engaged in counterinsurgency operations. The Gurez sector is one of the remote parts of the valley located in Bandipora district around 125 km from Srinagar. The sector is heavily militarized and soldiers are stationed on mountaintop posts to guard the Line of Control and prevent infiltration of militants. The Gurez sector is snow-covered even in summers and militants do not have long tracts of forest cover either to use as escape routes or to sneak inside LOC.

On 06 Aug, around 1 am about eight-odd heavily armed terrorists tried to infiltrate into the Indian territory near Govind Nullah in Bakhtor area taking advantage of darkness. The alert soldiers noticed the unusual movement and challenged the infiltrators moving from the Pakistan-occupied Kashmir (POK). Maj Kaustubh Rane along with his troops swung into action and engaged the militants trying to infiltrate. A fierce gun battle ensued thereafter in which two militants were killed. However, during the heavy exchange of fire Maj Kaustubh Rane and three other soldiers Rifleman Mandeep Singh Rawat, Rifleman Hameer Singh and Gunner Vikram Jeet Singh got severely injured. They were shifted to the 92 Base Hospital in Srinagar but latter they succumbed to their injuries and were martyred.

Maj Kaustubh Rane had been given the gallantry award, “Sena Medal” on 26 Jan 2018 and was to be felicitated by Mira Bhayandar Municipal Corporation in the later part of 2018. Maj Kaustubh Rane was a gallant and committed soldier who led from the front like a true military leader and laid down his life in the service of the nation. He is survived by his wife Kanika, son Agastya, father Sri Prakash Rane, mother Smt Jyoti Rane, and sister Kashyapi.