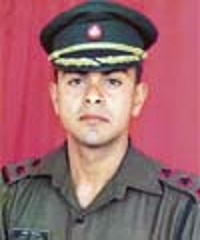 Major Kapil Vinayak was born on 26th October 1974 at AFMC, Pune. He went to City Montessori School, Anand Nagar, Lucknow during early years of his education. The family moved to Jalandhar after his father’s transfer and he finished his schooling from St. Joseph’s Convent School, Jalandhar. His desire to don the olive greens made him join the Army Service Corps. and later got commissioned in the 5131 ASC Battalion of the Indian Army in 1997. He was posted at Siachen Glaciers and took part in the war at Kargil in 1999 and played his part in the success of Operation Vijay. He was later posted at Srinagar.

On 20th July, 2005 the terror group Hizbul Muzahideen planted a car bomb just outside Burnhall School. Major Vinayak, who was there became a victim of the blast. However, the school gate had closed just a few minutes back and the school children were safe but it claimed the life of Major Vinayak. His supreme sacrifice made sure that thousands of children were safe. Major Kapil Vinayak was the 10th Martyr Officer hailing from Jalandhar who sacrificed his life for the nation.