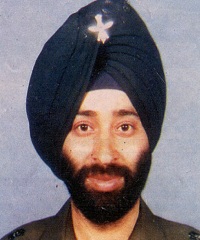 Major Kanwal Gulzar Singh was Born on 3 April 1963, in a military family. Maj Gulzar’s father, brother, grandfather and other relatives had also served in the army. Son of an army veteran Major Kartar Singh, Major Kanwal was known as ‘Yudhisthir’ (The name of the eldest of Pandava brother which symbolizes truth and idealism ) among his unit officers for his upright, caring and sober nature.

Major Kanwal Gulzar Singh was very fond of reading and had a huge collection of books, which have been preserved by his mother as her prized possession. He also had keen interest in music and playing hockey. He had a passion for military life and had undergone various training courses in his service career including high altitude course, commando training and the prestigious Defence services staff course.

Maj Gulzar’s unit was deployed in Manipur till May 1999 and was ordered to move to Kashmir in the early phase of Kargil war. His train from Manipur had reached Jalandhar on 05 June 1999, where the entire family had gone to meet him. The family was very happy as they were meeting him after a long time since he had not got leave for the last eight months. Maj Gulzar’s brother Maj Paramjeet Singh was with 31 Med Regt at that time and serving in Akhnoor in J & K area. Maj Gulzar’s wife Smt Harjeet Kaur and their two kids at that time were in Meerut staying in separated family quarters. Maj Gulzar had called up his father on 03 Jul 1999 few hours before going out on the fateful operation on the night of July 4. His father Maj Kartar Singh had encouraged him and had given his blessings for victory and long life.

During 1999, Maj Kanwal Gulzar Singh was on deputation with 32 Rashtriya Rifles from his original 5th battalion of 9 Gorkha Rifles. On 4th July 1999, Maj Gulzar was on a patrol along with his troops in Kupwara district. The area was infested with terrorists and was also used by the infiltrators across the border to enter into the Indian territory. There was a spurt in terrorist activities in Kupwara area owing to the ongoing Kargil war at that time. In a surprise attack a group of terrorists suddenly ambushed the patrol team headed Maj Gulzar when they reached near to their hideout. The patrol party though taken aback by the sudden attack swung into action and took up positions to counterattack.

A fierce gun-battle ensued thereafter in which Maj Gulzar got hit by 18 bullets and was martyred. Maj Gulzar was a committed soldier and an officer par excellence who laid down his life in the service of the nation. Maj Kanwal Gulzar Singh is survived by his wife Smt Harjeet Kaur, daughter Shikha and  son Akashdeep Singh.