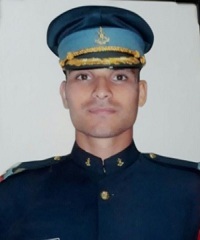 Major Kamlesh Pandey hailed from Dugoli village in Haldwani district of Uttarakhand. Son of Sri Bhuvan Chand Pande, Maj Kamlesh had got selected as an airman in the IAF and later joined the Army as a commissioned officer. After serving for a couple of years with his parent unit, Maj Kamlesh Pandey was deputed to serve with 62 Rashtriya Rifles battalion deployed in J & K area for counter insurgency operations.

On the late night of 2nd August 2017, Maj Kamlesh Pandey’s unit received information from the intelligence sources about the presence of terrorists in Zaipora area of Shopian district. It was decided to launch an operations against the terrorists and deal with the threat. As planned the assault team led by Maj Kamlesh Pandey reached the suspected area and launched the search and cordon operation. At around 2 am on 3rd Aug, while the operation was underway, the troops of 62 RR came under attack from the terrorists, firing from vantage points.

A fierce gun battle ensued thereafter with heavy exchange of fire. Three soldiers including Maj Kamlesh Pandey were injured, who were rushed to Army’s 92 base hospital in Srinagar. Maj Kamlesh Pandey took five bullets including one on the neck and two on lungs injuring him severely.  Consequently Maj Kamlesh Pandey succumbed to the injuries, en-route to the hospital and was martyred. Maj Kamlesh was a brave and committed soldier who laid down his life in the line of his duty, living up to the highest traditions of Indian Army .