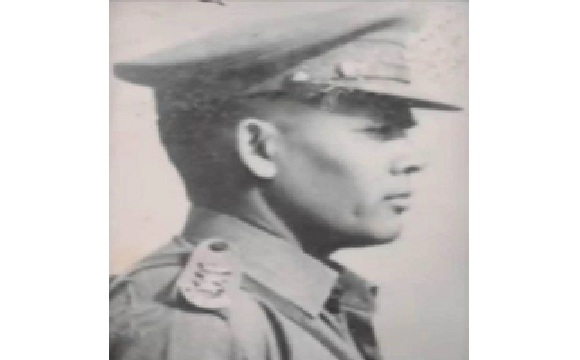 Major KS Budhwar hailed from Sonaria Kalan village of Rohtak district in Haryana and was born on 5th Feb 1931. He grew up to be a sporty and studious young boy, who was fascinated with the army. Consequently, he joined it as a member of 'Boys company' when he was merely 14 years old in 1945. Later, he was recruited into 2nd Grenadiers battalion as a Sepoy. He was then promoted to the rank of Lance Hav by his commanding officer during a deciding boxing match held at Military School Ajmer (erstwhile King George School), where he won the game against all odds.

Thereafter he got selected through a competitive examination to be a commissioned officer. After the rigorous training he was eventually commissioned as a 2nd Lt in 1959 into 17 Kumaon battalion of the Kumaon Regiment, an infantry Regiment known for its valour and battle honours in various operations. Subsequently he served in various operational areas with challenging terrain and strenuous operating conditions. His colleagues often defined him as a physically tough and soft-spoken officer. During 1963, he also served with the Ladakh Scouts battalion specially trained for mountain operations. In a short span of time, he gathered experience of serving in diverse areas ranging from the desserts of Bhuj to the mountains of Mizoram.

On 23rd May 1961, then 2nd Lt Budhwar was detailed as a Patrol Leader of a Long-Range Patrol which proceeded to Indo-Tibet Border. The recce party aimed to select suitable positions for a Winter platoon post and obtain general information regarding the route and the area at an altitude of 16000 feet. He led a party of 19 OR, 159 civilian porters, and 26 mules. The task involved a strenuous march of 164 miles crossing two most difficult and treacherous snow-bound passes at the height of 17590 feet and 17680 feet, respectively. Moreover, there were no signs of tracks and human life. The party established its first camp at the height of 11232 feet to acclimatize itself before it could venture to cross the snow-bound and challenging pass. However 2nd Lt Budhwar faced another challenge in addition to the difficult terrain. The civilian porters refused to go forward mainly because of two reasons.

First, no civilian porter had ever gone beyond the recce area. Second, the civilian porters were afraid of avalanches at the height of the passes. In fact, the avalanches and continuous snowfalls had utterly wiped out the tracks. At this stage, 2nd Lt Budhwar took a bold decision and went back to the base and fetched mules to complete the task assigned to him. He, with two ORs, marched back to the base and went from house to house and collected enough mules and again marched up to the firm base. Even the soles of the shoes 2nd Lt Budhwar was wearing had been completely worn off, but undeterred he marched on. Upon reaching the firm base, he re-organized the administrative details and set forward to cross the high mountain passes with no delay. He showed exceptional leadership qualities during the operation for which, with only 1.5 years of service, he was awarded the Sena Medal (gallantry). By 1968 he had been promoted to the rank of Major and appointed as the first Second-In-Command of the newly raised unit 31st Kumaon.

During 1970, Maj KS Budhwar was serving with 31 Kumaon deployed in Assam for counter-insurgency operations. Before the formation of the Mizoram state in 1987, there were Mizo-dominated areas in Mizo district of the Assam state. The Mizo organizations, including the Mizo Union had long complained of step-motherly treatment at the hands of the Assam Government, and demanded a separate state for the Mizos. The growing discontent with the Government ultimately had resulted in a secessionist movement led by Mizo National Front (MNF). The extremist section within MNF advocated the use of violence to seek independence from India. A special armed wing called the Mizo National Army (MNA) was created for the purpose. The MNA consisted of eight infantry "battalions" organized on the pattern of the Indian army. The MNA rebels often would target Indian Army troops as part of their armed rebellion. As part of an operational plan Maj KS Budhwar's unit was given the task of neutralizing Mizo-insurgents camps.

On 18 Feb 1970, Maj Budhwar was tasked for one such operation against the insurgents. As planned, Maj Budhwar reached the suspected area near Lankar (then East Pakistan) along with his team comprising 1 Havaldar and 5 ORs. Maj Budhwar deployed his men tactically to achieve maximum surprise. Maj Budhwar leading from the front successfully ambushed the insurgents and managed to eliminate the entire section. However one insurgent hiding behind nearby bushes opened fire at the troops from close range. The attack proved fatal for Maj Budhwar and his comrades. None of the valiant soldiers survived to tell the tale of one of the first surgical strikes undertaken by the Indian army. The bodies of the fallen soldiers were cremated in a village called Phuldungsei located approximately 50km from the location of the ambush. Maj KS Budhwar was a gallant soldier and gritty officer who led from the front and laid down his life in the line of his duty.