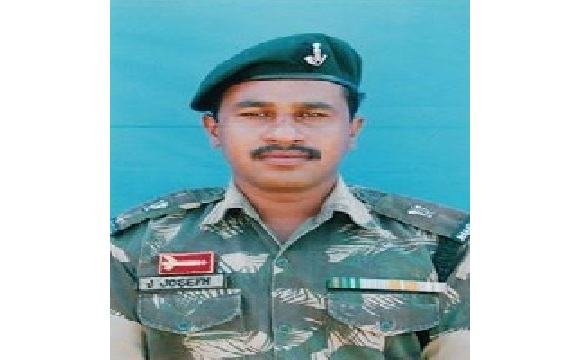 Maj Jojy Joseph hailed from Gandhinagar district of Gujarat and was born on Feb 21 1976. Son of Shri PT Joseph and Smt Lois Joseph, he had two brothers James and Jones as his siblings. He did his initial schooling in Mount Carmel School and then went to St. Xavier’s High School in Gandhinagar. He grew up to be a very sensible boy with high moral values. While in school, he once collected INR 1,000 plus for his Mount Carmel School in support of the construction of the school auditorium. This he did by writing a drama and directing it.

He nursed the idea of joining the Armed Forces since his younger days and his inclination grew along with age. He had keen interest in sports and excelled in playing football, cricket and hockey and went on to play at the State level. Right from his school days, he was very particular about his turnout and grooming. He was seen as a thorough gentleman who believed in living a principled and disciplined life. After his 12th class he cleared UPSC entrance exam and got selected to join National Defence Academy (NDA) at Khadakwasla, Pune. At NDA, he was very active in sports and earned the nickname of “mountain goat” by his fellow cadets for his ability in scaling the rough hilly terrain during hikes and marches. Later he went on to join the Indian Military Academy (IMA) in Dehra Dun.

He was commissioned in June 1998 as a Lieutenant into 14 MLI of the Maratha Light Infantry Regiment, an infantry Regiment well known for its dauntless soldiers and numerous battle exploits.  As his first assignment, he was posted in Tripura where he took part in a number of counter insurgency operations. Later he served in Sikkim and had experience in high altitude areas near Chinese border – Nathula Pass. Thereafter, he underwent commando training in Belgaum and developed into a tough soldier. After serving for sometime, he got married on 14th May 2001 to Ms Mini from Korba in Chhattisgarh. He was then deputed to serve with the UN Peace Keeping Force in Ethiopia-Eritrea for seven months as part of the Indian contingent. Thereafter he was posted in Binnagudi in West Bengal and got promoted to the rank of Major in two years.

During June 2005, Maj Jojy Joseph‘s unit was deployed in Rajouri district of J&K close to the Line of Control(LOC). The unit troops were engaged in counter-insurgency operations on a regular basis as its AOR (Area of Operation) was affected by active militancy. The LOC remained highly active and volatile with ceasefire violations occurring very often and without any warning. Besides manning the forward posts in Rajouri district,  Maj Jojy Joseph’s unit also undertook operations to check the infiltration bids as its AOR was prone to infiltration by the militants from across the border. On 07 June 2005, the security forces received credible information from the intelligence sources about the presence of terrorists in Kalakote tehsil of Rajouri district. Based on the intelligence inputs Maj Jojy Joseph‘s unit decided to launch a search and destroy operation in the suspected area.

On 08 June 2005, as planned the assault team led by Maj Jojy Joseph reached Katari Gala in Gadyok area of Dharamshal police station of Kalakote tehsil. After reaching the suspected area Maj Jojy Joseph directed his troops to cordon it off. Soon the troops made contact with the terrorists who on being challenged opened fire at the troops. Thereafter a fierce gun battle ensued with heavy exchange of fire. Maj Jojy Joseph leading from the front, deployed his troops tactically to block the escape routes of the terrorists. He then displaying displaying commendable courage, in a swift action eliminated one terrorist. However, weapon of the slain terrorist fell down leading to firing of a burst, which hit Maj Joseph. Maj Jojy Joseph succumbed to his injuries and was martyred. Maj Jojy Joseph was a valiant soldier and a fine officer who led from the front and laid down his life in the service of the nation, following the highest traditions of the Indian Army.

Major, militant commander killed in gun battle
Jammu: An Army Major and an area commander of militant outfit, Harkat-i-Islami, were killed and another security force personnel injured in a gun battle at Rajouri. An improvised explosive devise (IED) was also defused outside a college in Doda today. The gunfight occurred between militants and the Army at Teeru in Kalakote in which Maj Jojy Joseph fell to bullets. Another personnel of the security force was injured. The area commander of Harket-i-Islami has been identified as Zulfikar. One AK 56 rifle, AK 47 magazines and 15 Chinese grenades were recovered from the site. Elsewhere in Doda, an improvised explosive device which was reportedly planted outside a college was defused by security forces.

RAJOURI: An Army Major and a Jaish-e-Mohammed (JeM) 'commander' were killed and two Army jawans including a Company Havildar Major (CHM) were injured in an encounter at Katari Gala in Gadyok area of Dharamshal police station of Kalakote tehsil this morning. The Army personnel had a face-to-face encounter with the militants at about 10 am. Major Jojy Joseph, who was leading one of the Army team, immediately opened firing killing one of the militants. However, weapon of the slain militant fell down leading to firing of a burst, which hit Major Joseph, leading to his death on spot. Two other Army jawans were injured in firing by the second militant, who managed to escape into a surrounding forest area. The militant killed in today's operation has been identified as Zulfikar, an 'area commander' of Jaish-e-Mohammed. He was also believed to be a Pakistani.

My son, Major Jojy Joseph, 14 Maratha MLI, led a valiant life. He always liked adventure and was courageous and hardworking. He is not dead!! He is just resting after fighting a weary and gruesome battle for the motherland.

My family and I express our sincere gratitude to the Indian Army, the Government of Gujarat, all our well wishers and the media for all the support and heartfelt condolences extended towards us.

This is the hour for all of us Indians to resolve to unite and fight against the evil of Terrorism/Militancy and to wipe it out from the face of our dear motherland.