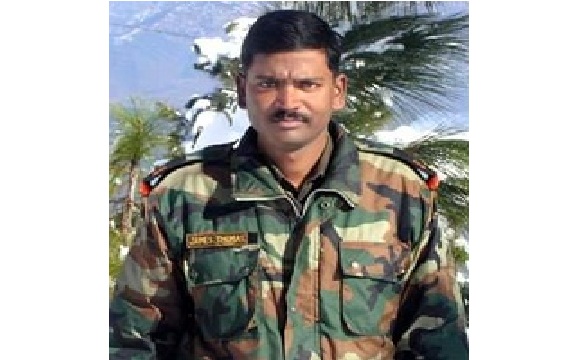 Maj James Thomas was born on 06 Sep 1976 and hailed from Bikaner in Rajasthan. Son of Shri P T Thomas and Smt Mary Kutty Thomas, Maj James had the inclination to join the Armed Forces since his childhood. He completed his schooling from Bikaner Boys' School and then went on to study in Rajkiya Dungar College Bikaner. He continued to pursue his dreams and eventually got selected to join the Army after completing his education.

He was commissioned into 10 Sikh LI of the Sikh Light Infantry Regiment, an infantry Regiment well known for its fearless soldiers and numerous battle honours. After serving for few years he got married to Ms Nita and the couple had two daughters Charlotte and Sherryl.

During 2005-6, Maj James Thomas’s unit was deployed in J & K area and was engaged in counter-insurgency operations on a frequent basis. His unit’s area of responsibility fell in Poonch district and was prone to infiltration by the militants from across the border. On 27 Jan 2006, the unit received information from intelligence sources about the infiltration attempt by the militants in its area of responsibility. A decision was taken by the unit to foil the attempt by laying an ambush in the suspected area. Maj James Thomas was tasked to lead the operation to neutralize the threat of infiltration. Maj James reached the suspected area along with his soldiers in the night of 27 Jan 2006 and laid the ambush as planned.

On 28 Jan at 0230 hours, Maj James observed a group of terrorists attempting to skirt the ambush and infiltrate towards the right flank. Realizing the impending danger to own troops in the rear, Maj James moved forward to intercept the infiltrating terrorists, lobbed grenades and engaged them in a fierce firefight. In a display of raw courage and determination, Maj James succeeded in killing four terrorists single-handedly. However, during this heavy exchange of fire, Maj James also sustained grave splinter injuries. Meanwhile, Maj James observed two more terrorists closing in from the other flank. Despite being seriously injured, he crawled towards the terrorists to lob grenades and fired at them with his personal weapon. Maj James managed to kill both the terrorists, before succumbing to his injuries. Maj James Thomas was a committed soldier and an officer par excellence who led from the front and laid down his life in the service of the nation following the highest traditions of the Army.

Major James Thomas, Company Commander, was entrusted the task to prevent infiltration across the line of control. On 27 January 2006, he established an ambush in general area in district Poonch in Jammu & Kashmir. On 28 January at 0230 hours, he observed a group of terrorist attempting to skirt the ambush and infiltrate towards the right flank. Realizing the impending danger to own troops in the rear, he decisively moved forward to intercept the infiltrating terrorists, lobbed grenades and engaged them in a fierce firefight. With great determination, unflinching courage and unmindful of personal danger, he succeeded in killing four terrorists single-handedly. In doing so, he also sustained grave splinter injuries. Meanwhile, he observed two more terrorists closing in from the other flank. He crawled towards the terrorist to lob grenades and fired at them with his personal weapon. With the presence of mind, he succeeded in killing the two terrorists, before succumbing to his injuries.

Major James Thomas, displayed conspicuous gallantry, tactical acumen and made the supreme sacrifice in the highest traditions of the Indian Army while fighting against the terrorists.