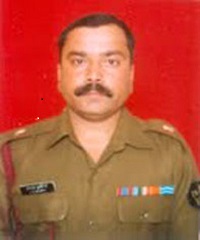 In his 11 yrs of service, he had undergone many courses like Young Officer’s course, Regimental signal officer course, Advance gunnery course and junior commanders course. The young and dynamic officer was on deputation as Military Observer with United Nations Stabilizations Mission in Democratic Republic of Congo (MONUSCO). He had joined MONUSCO as MILOB on 10 Nov 2010 and had served as MILOB at Team Site Masisi in North Kivu Bde for seven months prior to his last appointment as SO MOVCON, Kinshasa.

Maj Jaidev Singh, while on duty at Kinshasa (Kongo ), was traveling in a vehicle where he met with an accident. He was rushed to the hospital for the treatment however he could not survive and breathed his last on 7th October 2011. The unfortunate accident extinguished a very promising officer’s life and career. His leadership and devotion to duty will always remain enshrined in the annals of the Regt of Arty.

Major Jaidev Singh Guleria is survived by his wife Bindiya Guleria and his daughter.