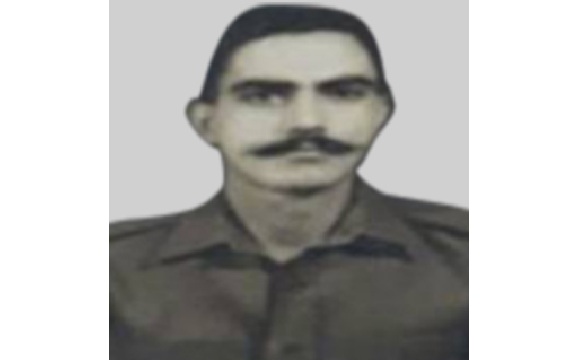 Major Hitesh Kumar Palta hailed from the Ferozepur district in Punjab. Son of Shri Dewan Chand Patla, he joined the Army after completing his initial education. He was commissioned into the 9 Kumaon battalion of the Kumaon Regiment, one of the most decorated regiments of the Indian Army. The regiment traces its origins to the 18th century and has fought in every major campaign of the British Indian Army and the Indian Army, including the two world wars. The word Kumaon is derived from the word “Kurmanchal” meaning Land of the “Kurm” avatar (the tortoise incarnation of Lord Vishnu, preserver of the Hindu Trinity).

During 1984, Maj Hitesh Kumar Palta's unit 9 Kumaon was based at Jalandhar and operating under the command of 350 Infantry Brigade. In early 1980s, Sikh agitation took an ugly turn and a group of militant Sikhs under the leadership of their leader Jarnail Singh Bhindranwale upped the ante.  In December 1983, fearing arrest, JS Bhindranwale with few hundred armed supporters moved into the Golden Temple complex. In June 1984, Indian government decided to send troops to the Golden Temple complex to clear it out of militants in an operation called, "Op Bluestar".  350 Infantry Brigade consisting of 9 Kumaon, 10 Guards, 12 Bihar and 26 Madras and commanded by Brigadier D.V. Rao was assigned the task of clearing the temple complex.  The Brigade was supported by paratroopers from 1 Parachute Regiment and Special Frontier Force (SFF). Maj Hitesh Kumar Palta's unit 9 Kumaon under the command of Lt Col K Bhaumik became part of the operation along with 1 Para Regt commanded by Lt Col KC Padha, 10 Guards commanded by Lt Col Israr Rahim Khan, 12 Bihar commanded by Lt Col KS Randhawa, 26 Madras commanded by Lt Col  Panniker, 15 Kumaon commanded by Lt Col NC Pant, 9 Garhwal Rifles and 10 Dogra,.  All the infantry battalions belonged to 9 Division with the exception of 9 Garhwal Rifles from 15 Division.  The Artillery commanded by Col EW Fernandez along with Armored Personal Carriers (APCs) and BMPs of 8 Mechanized Battalion and tanks of 16 Cavalry were also used in the operation.  The paramilitary troops of Border Security Force (BSF), Central Reserve Police Force (CRPF) and Special Frontier Force (SFF) also participated in the operation.

The operation at Golden Temple complex was divided into three phases.  The Phase I was the main assault to neutralize militants, Phase II for mopping up and Phase III for securing of hostels and complete control of the complex and handing over all prisoners to other units.  Different units were launched from different entrances to kill or capture militants.  26 Madras from southern (Langar side) entrance to secure southern and eastern wings, I Para from eastern Ghanta Ghar entrance to secure Akal Takht (later this objective was taken away from 1 Para and it was tasked to only secure Darshni Deodi and Harmandar Sahib), 10 Guards from eastern Ghanta Ghar entrance to secure Akal Takht and northern wing and SFF from main north-western entrance to secure Akal Takht and western wing. Maj Hitesh Kumar Palta's 9 Kumaon and two companies of 15 Kumaon were assigned the task of clearing the hostel complex.  Major Palta who was the company commander of 9 Kumaon escorted Akali leaders from Guru Ram Das Sarai to a MES bungalow. The operation launched on 03 June 1984 faced many reverses and setbacks but continued. On 05 June during the mopping up operation led by Major Palta, the troops came under fire, severely injuring Major Palta. He later succumbed to his injuries and laid down his life in the line of his duty.

Maj Hitesh Kumar Palta was a committed soldier and a gritty officer who led from the front and made the supreme sacrifice in the service of the nation. Maj Hitesh Kumar Palta was given the nation’s second highest peacetime gallantry award “Kirti Chakra”, for his outstanding courage, unyielding fighting spirit and supreme sacrifice in the line of his duty.