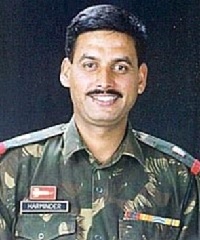 Maj Harminder Pal Singh hailed from Mundi Kharar village in Ropar district of Punjab. Son of an Army veteran Capt Harpal Singh and Mrs Surinder Pal Kaur, Maj Harminder nursed the idea of joining the Armed Forces since his childhood. An alumnus of Khalsa Senior Secondary School, Kharar, and Government College, Mohali, he continued to pursue his dream after graduation and joined the Army in March 1992. He was commissioned into 18 Grenadiers of the Grenadiers Regiment, an infantry Regiment known for its intrepid soldiers and numerous battle honours.
Within short time of joining his unit, 18 Grenadiers the young Lieutenant Harminder honed his soldierly skills and developed into a fine officer. He commanded respect of his seniors and men under him as well. Soon he was promoted to the rank of Capt and then Major. Maj Harminder had a close rapport with his soldiers and spent considerable amount of time with them like a good military leader. He was known as `Sant-Sipahi’ (saint soldier) among his troops as he was a tough soldier with a humane approach. Maj Harminder got married to Ms Rupinder Pal Kaur, hailing from Sri Ganganagar in 1997. Subsequently, they had a son, Navteshwar, who was born on 12 Jan 1999 and was barely three months old at the time of his father’s martyrdom.
Baramulla Operation : 13 Apr 1999

During April 1999, Maj Harminder’s unit was deployed in Baramulla district of J & K and was engaged in counter insurgency operations on a frequent basis. At about 1 p.m. on 13 Apr 99, Maj Harminder’s unit received information from the intelligence sources about the presence of some hard core militants in the congested locality of Khan Mohalla,  in the Sudarkut Bala village, approximately 40 km north of Srinagar in Baramulla district of the Kashmir Valley. After analyzing the situation the unit decided to act swiftly and Maj Harminder was tasked to launch an operation against the militants immediately. Maj Harminder with approximately 50 men under his command, reached the suspected locality by 1:30 p.m. and launched cordon and search operation.

When the troops were approximately 40 metres from the suspected houses, the militants opened heavy automatic fire, and a fierce fire-fight ensued thereafter. In this fire, Maj Harminder sustained bullet injuries on his left arm, while two other soldiers received splinter injuries from a rifle grenade fired by the militants. The assault team was now pinned down in the open, and the gun-battle intensified further. But Maj Harminder and his troops held their ground firmly countering their every move. Realizing the gravity of the situation, with utter disregard to personal safety, Maj Harminder in a daring move charged towards the side window of a room from where effective fire was being brought down on his troops. Displaying courage and determination, he engaged the militants from close quarters and manged to eliminate two of them. The third militant however, emerged from his hiding and shot at Maj Harminder , wounding his seriously. Maj Harminder sustained a gun shot wound on his temple but engaged the militant till he succumbed to his injuries.

Maj Harminder displayed outstanding gallantry and resoluteness while leading his troops like a true military leader. Maj Harminder was given the gallantry award, “Shaurya Chakra” for his cold courage, unfaltering leadership and supreme sacrifice.  His mortal remains, draped in the tricolour, were sent to his village, on 14 April 1999 where he was cremated with full military honours.