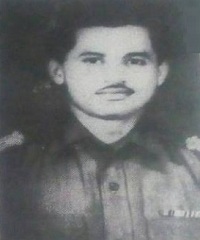 Major Gurdev Singh Jaswal was born on 20th Jul 1942 at Deoli village in Una district of Himachal Pradesh. Son of Jem Ladha Singh, a veteran of World War II and 1947-48 Indo-Pak War, Maj Gurdev did his schooling from Public High School, Ghanari near Una. After his graduation, Maj Gurdev got selected to join the army and was commissioned on 10th May 1964 at the age of 22 years. He was commissioned into 22 Punjab Bn of the Punjab Regiment, an Infantry regiment known for its valiant soldiers.

By 1971, he had been promoted to the rank of Major and had put in about 7 years of service operating in various field areas. During the 1971 Indo-Pak War Maj Gurdev ‘s unit 22 Punjab was placed under the operational command of 39 Infantry division operating in the western sector.

During Dec 1971, Maj Gurdev’s unit 22 Punjab was deployed in Shakargarh Sector on the western border. Maj Gurdev Singh was commanding a rifle company during that time and was tasked to capture Chak Amru railway station in the Shakargarh Sector on 07/08th December 1971. Chak Amru’s location was expected to be the pivot of maneuver of the Pak army and its capture was vital for the Indian army for furthering its operations. The B coy of 22 Punjab under Maj Gurdev was tasked to spearhead the attack on the night of 07/08th December.

Maj Gurdev led the attack through the 600-yard deep minefield. The swift and daring attack took the enemy for surprise and was routed. During the reorganization, his company came under accurate and intense medium machine gun and artillery fire. Despite this, he moved from trench to trench to encourage his men to hold their positions.  While doing so, Maj Gurdev got grievously injured by an enemy medium machine gun burst. He, however, refused to be evacuated and kept directing his soldiers till the company successfully captured its objective. Maj Gurdev was later shifted to the medical facility where he succumbed to his injuries and was martyred.

The Citation For Vir Chakra reads him to :

Major Gurdev Singh Jaswal was commanding a company during the operations against Pakistan in the Western Sector. His battalion was ordered to capture the enemy position based on Chak Amru railway station in the Shakargarh Sector. He led the assault through a tactical minefield of 600 yards depth. Because of the swift assault led by him, the enemy was taken by surprise and routed. During the reorganization, his company came under accurate and intense enemy medium machine gun and artillery fire. Despite this he moved from trench to trench to encourage his men. While doing this, he was mortally hit by an enemy medium machine gun burst.

Throughout this action, Major G.S. Jaswal displayed gallantry, determination, and leadership of a high order.