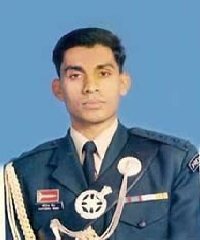 Major Gopi Singh Rathour hailed from Dehradun in Uttarakhand and was born on 14 Nov 1970. He was commissioned in December 1992 at the age of 22 years into 16 Garh Rif battalion of the Garhwal Rifles Regiment, an infantry Regiment well known for its intrepid soldiers and numerous battle exploits. He excelled in various disciplines during his training and won the coveted ‘Sword of Honor’ for standing first in the order of merit. At a fairly young age and early stage of his carrier in the Army he was selected for the staff course at the prestigious Defence Services Staff College, Wellington, and proved his worth there too by his brilliant performance.

Maj Gopi Singh Rathour had a matchless passion for books and his love for reading and writing was boundless. He was a valiant soldier who had a literary bent of mind and a philosophical disposition to life. He was a soldier of extraordinary caliber and was adored and admired by all. His colleagues admired his valor and called him ‘Eagle’, as he had served fearlessly in various terrorist-hit areas in Jammu and Kashmir and had led many successful operations.

He served as Aide-de-charge(ADC) to the president of India, KR Narayanan for close to five years and continued in his post as the ADC to the next president Dr. A.P.J Abdul Kalam. He did a commendable job at Rashtrapathi Bhavan and won many accolades from the president himself. During his time in the Rashtrapathi Bhavan, he gained an in-depth knowledge of all the plants in the Mughal Garden and would explain about them to all the visitors including the foreign dignitaries. Maj Gopi’s had a fabulous collection of books about poetry, horticulture, and war strategy as he was an avid reader with deep interest in diverse fields. During his tenure in Rashtrapati Bhavan, he published two books in the Hindi language. While the first one “Aaj Se Pehele” was a book of poems, the second one “Aur Kya Chahiye” was a collection of short stories. Both reflected his literary genius and ability to observe nuances of life very closely.

After nearly five years in the Rashtrapathi Bhavan serving as the president’s aide, he longed to be in the thick of operations and volunteered for a posting to J&K. He was deputed to serve with 14 RR battalion deployed in J&K for counter-insurgency operations. Maj Gopi acquitted himself very well in daredevil operations and proved his mettle as a soldier. His colleagues in combat were impressed to see Maj Gopi out on operations against terrorists six nights a week. Apart from going on operations during the daytime he especially preferred to carry out operations in night. It abundantly spoke of his bravery, fearlessness, and devotion to duty. Besides being a tough soldier he was a great human being with a compassionate heart. He put in concerted efforts to understand the problems of Kashmiri people in the larger context of social, economic, and religious issues. He even had started reading Koran to understand the minds of the people of Kashmir and reach out to their hearts.

During 2005, Maj Gopi Singh Rathour was serving with 14 RR battalion deployed in Bandipora district of J&K. As the area of operation (AOR) of the battalion was infested with militants, Maj Gopi and other troops were engaged in counter-insurgency operations on a regular basis. By Nov 2005, Maj Gopi had already taken part in a number of operations and gathered substantial experience in dealing with challenging situations. Based on the information from the intelligence sources, the unit decided to launch an operation to flush out terrorists holed up in a building in Bandipora. On 10 Nov 2005, the operation was launched under the leadership of Maj Gopi, who swung into action as per the operation plan.

Maj Gopi and his troops reached the suspected area and launched the cordon operation. As the terrorists felt cornered, they started firing indiscriminately, triggering a fierce gun battle. Maj Gopi displaying utmost bravery managed to kill a terrorist in a close combat situation. However during the heavy exchange of fire, Maj Gopi too received multiple gunshots and collapsed with serious injuries. He later succumbed to his injuries and was martyred. Ironically, he made the supreme sacrifice on the very next day of the demise of his former boss KR Narayanan. Maj Gopi was a valiant soldier and an officer par excellence, who laid down his life in the line of his duty. Maj Gopi Singh Rathour was given the gallantry award, “Shaurya Chakra” for his outstanding courage, leadership, and supreme sacrifice.