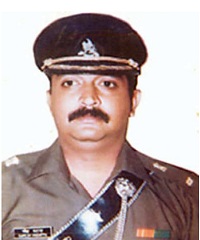 Major Ganesh Madappa hailed from Kodagu district in Karnataka and was born on 5th February 1963. Son of an army veteran Capt C P Madappa and Smt Seethamma Madappa, Maj Ganesh was inclined to join the Armed Forces like his father, since his younger days. While growing up, he continued to follow his dream and eventually joined the Army.  He was commissioned into 82 Armd Regt of the Armoured Corps, the combat arm of the Indian Army, well known for its tanks-the mean machines that create shock and awe in the enemy. After serving with his parent unit for over a decade, he got deputed to serve with 36 RR battalion deployed in J&K for counter-insurgency operations.

During September 1995, Maj Ganesh Madappa’s unit 36 RR was deployed in Budgam district of J&K. As the AOR (area of responsibility) of the unit ran along the LOC, the unit troops had to maintain a strict vigil at all times to check any infiltration attempt by the terrorists from across the border. A number of terrorists were also active in the area  and the unit was undertaking operations against them on a regular basis. Based on the information from intelligence sources, an operation was planned on 17 Sep 1995, to attack a terrorists’ hideout in a village in the Budgam district.  Maj Ganesh Madappa was tasked to lead that operation with a team of soldiers.

Maj Ganesh Madappa and his troops reached the suspected area as per the plan and launched the search and cordon operation. But the terrorists panicked with the presence of the troops and in a bid to escape attacked them from a house nearby. Maj Ganesh quickly analysed the situation, and deployed his men tactically to cordon off the suspected house. Maj Ganesh himself rushed forward and directed his men to block the escape routes. The terrorists in a desperate attempt to escape, rushed out firing indiscriminately. A fierce gun-battle ensued thereafter with Maj Ganesh courageously engaging the terrorists from a close range, without caring for his own safety. However while doing so, he received multiple gunshots but continued to fire at the militants. In a show of rare courage and determination, he managed to eliminate one terrorist before collapsing. He later succumbed to his injuries and was martyred. Maj Ganesh Madappa was a valiant soldier and a gritty officer who led from the front and laid down his life, following the highest traditions of the Indian Army.

Maj Ganesh Madappa was given the gallantry award, “Shaurya Chakra” for his exceptional valour, leadership, devotion to duty and supreme sacrifice. Maj Ganesh Madappa is survived by his wife Smt Nirupa Madappa and daughter Tanavi.