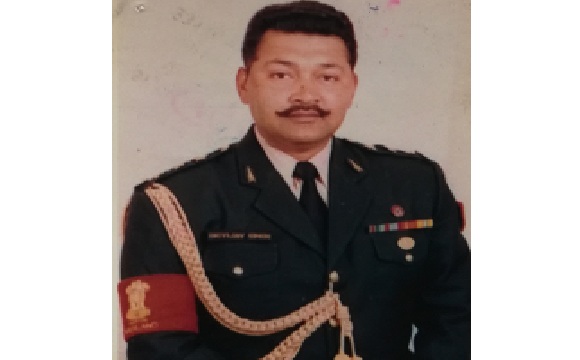 Major Digvijay Singh Sumal's family originally hailed from Uttar Pradesh, but he was born in Gwalior on 5 July 1969. Later his family settled down in Jaipur in Rajasthan. Son of an army veteran Colonel Chhatrapal Singh and Smt Chhagan Kanwar, Major Digvijay Singh had a brother Jaydeep Singh as his sibling. Owing to the frequent postings of his father, Major Digvijay had to change schools often and studied from various schools at Gaya in Bihar, Meerut in UP and Amritsar (Punjab). He was a keen sportsman and excelled in various sports including Hockey.  He also had a keen interest in debate and quiz competitions during his student days. Coming from a military family wherein close to 10 members of his family served in Armed Forces, he was inclined to serve in the Army like his father.

He continued to follow his passion while studying and eventually got selected to join the Army after his graduation. He joined the Indian Military Academy (IMA) Dehradun in July 1991 and was commissioned as a 2nd Lieutenant on 19 Dec1992 at the age of 23 years. He was commissioned into 9 Rajput battalion of the Rajput Regiment, an infantry Regiment known for its valour and battle honours in various operations. After completing his training he served in various operational areas. He also had the distinction of serving as ADC to governor of Nagaland for two years.  After serving for few years, he got married to Ms Mahendra Kanwar daughter of Capt Tej Singh from Rajasthan, on 2 Dec 1996 . By the year 2000, he had completed around eight years of service and had been promoted to the rank of Major.

During 2000, Major DS Sumal's unit 9 Rajput battalion was deployed in the Baramulla district of J&K.  Besides manning the forward posts, the unit troops were engaged in operations against the terrorists on a regular basis as the unit's area of responsibility (AOR) was active with militancy. The area was also prone to infiltration, which necessitated regular armed patrols to check any infiltration from across the border. The AOR of the unit also spanned over remote rugged mountainous terrain with extreme weather conditions, especially in the winter season. The enemy forces often resorted to unprovoked firing either to give cover to the infiltrators or dominate the area in general.  On 02 Jan 2000, Pakistani forces resorted to heavy firing at Rajput Tekri and nearby posts in Uri sector manned by the troops of Major DS Sumal.

Major Sumal and his troops immediately swung into action to give a befitting reply to the enemy. A fierce gun battle ensued thereafter lasting for several hours. However during the heavy exchange of fire, Major Sumal got severely injured. He later succumbed to his injuries and was martyred. Major DS Sumal was a brave and committed officer, who laid down his life at the age of 31 years in the line of his duty, living up to the highest traditions of Indian Army. He was given the gallantry award, “Sena Medal” (posthumous) for his exceptional courage, devotion to duty, and supreme sacrifice.