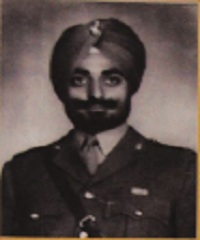 Major Devinderjit Singh Pannu was born on 10th April 1941 in Multan of present day Pakistan and later his family got settled in Jullundur, Punjab. Son of an Army veteran Lt Col Gurdial Singh, Maj Devinderjit Singh Pannu joined the Army on 10 June 1962 at the age of 21 years. He was commissioned into 5 Sikh of the Sikh Regiment, an infantry Regiment known for its intrepid soldiers and scores of battle honours.

By 1971, Maj Pannu had put in about 9 years of service and gathered substantial experience in various challenging operations. Son of an Army officer,  Maj Pannu was a soldier at heart and soon evolved into a no-nonsense and committed soldier. As the tensions with Pakistan escalated in 1971, his battalion 5 Sikh was deployed in Chhamb-Jaurian sector of J & K.

The Indo-Pak war of 1971 officially commenced on 03 Dec 1971 when Pakistani Air Force attacked various air fields of the IAF. Within hours after the air attack Pakistan’s 23 Division opened Artillery fire with all its nine Regiments along a 30-40 Kms front in the Chhamb sector. Soon therafter a well-coordinated attack with armour was launched on 191 Brigade, which was the only Brigade of 10 Division of Indian Army defending the area west of the Munawar Tawi river at that time. 5 Sikh battalion commanded by Lt Col Prem Khanna was part of the 191 Brigade and was given the task of blunting the Pakistani attack. Maj Devinderjit Singh Pannu was commanding one of the companies of the battalion and was given the responsibility of defending one of the important approaches to the sector.

Maj Pannu’s company was occupying a key position for the defence of Chhamb, when the enemy launched an attack on night of 04 December 1971. Maj Pannu immediately rushed to one of his platoons occupying a screen position at the border outpost and held out against the enemy attack. The attack continued throughout that night and thereafter for sixteen hours but Maj Pannu held on gallantly along with his troops and thwarted enemy’s advance. He then withdrew to his main position where his company faced valiantly the battalion strength attacks by the enemy for next two successive nights.
Maj Pannu repeatedly exposed himself to enemy small arms and artillery fire while moving from one locality to another, inspiring his men to repulse the enemy attack. However as the position was of strategic importance to the enemy, it launched another battalion attack on 5th morning,  preceded by heavy artillery fire. Maj Pannu once again swung into action and ordered his soldiers to retaliate forcefully. He kept moving from trench to trench, motivating his men with the war cry of the Regiment, “Jo Bole So Nihal, Sat Sri Akal” meaning, “one will be blessed eternally who says that God is the ultimate”. However, while doing so, Maj Pannu got hit by a shell and was martyred. Maj Pannu displayed grit, determination, and leadership skills of a very high order during the operation and laid down his life in the service of the nation.

The Citation of Vir Chakra awarded to him reads:

Major Devinderjit Singh Pannu was commanding a company of Sikh Regiment occupying a key position for the defence of Chhamb when the enemy launched an attack on night of December 1971. Major Pannu immediately rushed to one of his platoons occupying a screen position at a border outpost and held out against heavy pressure throughout that night and thereafter for sixteen hours while the position had virtually been surrounded. He then withdrew to his main position where his company was subjected to battalion strength attacks by the enemy on two successive nights.
Major Pannu repeatedly exposed himself to enemy small arms and artillery fire while moving from one locality to another, inspiring his men to beat back the enemy. Realizing the importance of this position, the enemy launched another battalion attack on 5th morning preceded by heavy artillery fire. While moving from trench to trench, encouraging his men, Major Pannu was mortally wounded by a shell and died at his post.
Throughout, Major Devinderjit Singh Pannu displayed gallantry, determination, and leadership of a high order.