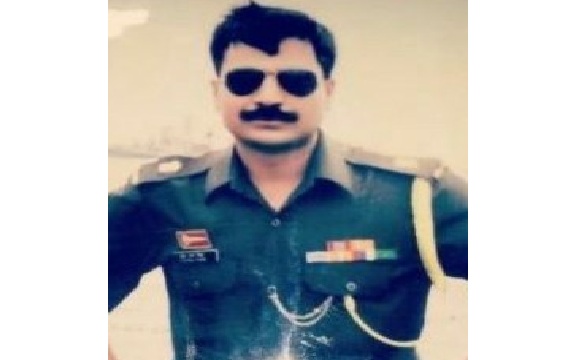 Place of birth : Shamli Dist (UP)

Major Desh Raj Singh hailed from Tajpur Simbhalka village of Shamli district in Uttar Pradesh and was born on 01 Dec 1961. Son of Shri Kaliram and Smt Raghubiri Devi, he was always inclined to join the armed forces right from his childhood. He continued to pursue his goal and eventually got selected to join the prestigious NDA in 1979. Later he went to IMA Dehradun and passed out after completing his training. He was commissioned as Second Lieutenant  into 5 Dogra battalion of the Dogra Regiment, an infantry regiment well known for its intrepid soldiers and numerous battle honours.

After serving for few years, he got married to Ms Saroj Singh and the couple had a son Ajay Raj Singh and daughter Aanchal Singh. During the Kargil war he served on the Punjab border as By the year 2003, he had put in around two decades of service and had been promoted to the rank of Major. By that time Maj Desh Raj Singh had served in various challenging operational areas and developed into a fine officer, who commanded respect of his juniors and seniors as well.

During Apr 2003, Maj Desh Raj Singh’s unit 5 Dogra was deployed in J&K for counter-insurgency operations. The AOR (Area Of Responsibility) of his unit was a hotbed of militant activities during that period and consequently, the unit troops had to be on guard at all times. Also the area had many mines laid during the Operation Parakram. Based on the information received from the unit intelligence sources about the infiltration bid by some hardcore terrorists in its AOR, the unit decided to launch an operation on 10 Apr 2003. Maj Desh Raj Singh was tasked to lead that operation along with few soldiers of his unit.

On 10 Apr 2003, Maj Desh Raj Singh and his comrades reached the suspected area as planned. As the area was known to have land mines, the troops had to tread very carefully as it entailed great risk. Many a times the soldiers of the Corps of Engineers were requisitioned to undertake mine clearance operation, if the area was suspected to be mined. However it was not possible every time to deploy sappers for the operation. On that day when the operation was underway by Maj Desh Raj Singh and his troops, one of the soldiers, got struck by a land mine and got seriously injured. Looking at the injured soldier, Maj Desh Raj Singh without caring for his own safety immediately swung into action and lunged forward to move the injured soldier to safety. However while doing so, Maj Desh Raj Singh himself got injured and later succumbed to his injuries. Maj Desh Raj Singh was a valiant soldier and gritty officer, who led from the front and laid down his life in the line of his duty.