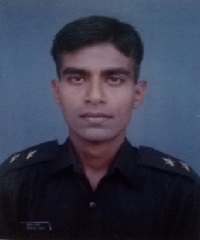 Major Deepak Yadav hailed from Ganeshpur in Mainpuri district of Uttar Pradesh. Son of an Army veteran Subedar Satya Ram Yadav, he followed in the footsteps of his father and joined the Army after completing his studies. He was commissioned into Army Education Corps (AEC), the education arm of the  of Indian army. As a student, Maj Deepak Yadav was an intelligent and bright child who used to perform very well, especially in English and Maths.

During his service career, Maj Yadav served as an instructor at the Indian Military Academy, Dehradun, and later was  sent to Afghanistan in March 2009 to teach the Afghan military personnel. Maj Deepak Yadav was a committed soldier and a fine officer who loved the Army’s disciplined life. Prior to the incident in Feb 2010, he had had a narrow escape from a grenade attack was still bearing the injury marks.

As part of Indian army’s commitment to  the war ravaged Afghanistan, several soldiers were sent in 2009-10 to provide humanitarian medical assistance and also to impart education to the Afghan military personnel. Major Yadav was deputed to Kabul in 2009, for such a mission and was staying in a guesthouse called ‘Noor’ along with other members of Indian army contingent. He was from the Army Education Corps and was in charge of providing education to the Afghan  military personnel.

In the early hours of February 26, 2010, the guesthouse was attacked by the heavily armed terrorists. Initially they blew an explosive laden vehicle by IED. This not only killed the guards, who were patrolling at the perimeter and guest house’s owner Haneef, it damaged the compound wall also. The terrorists then entered  the rooms of the guesthouse and started throwing grenades and firing at the unarmed Indian soldiers. Standing up to the challenge in the face of certain death, unarmed Major Deepak Yadav  along with his buddy crawled out of the debris of their respective rooms and rushed towards the officers on one side of the guesthouse and directed them towards a bathroom located in the inner most corner of the guesthouse.

By that time their hiding place was set ablaze by the terrorists by  grenade attacks and their clothing was on fire. Major Deepak Yadav displaying courage and care for fellow soldiers helped the other officers to move out of the burning room. In doing so, he sustained the grievous burn injuries and finally succumbed to them. Major Deepk Yadav  was posthumously awarded “Shaurya Chakra”, India’s third highest peacetime gallantry medal, for displaying conspicuous bravery, unyielding fighting spirit and supreme sacrifice.

The Citation of the Shaurya Chakra awarded to him reads:-

Major Deepak Yadav  was deployed to Kabul as part of the Indian English Language Team. In the early morning of 26 February 2010, a well guarded residential compound housing six Army medical officers, four paramedics and two other Army officers were attacked by heavily armed and determined terrorist suicide bombers. The attack was initiated by the detonation of a suicidal vehicle borne IED at the boundary wall resulting in the instantaneous death of three security guards and total collapse of the boundary wall and the residential compound.

The terrorists then started room to room search for any sign of survivors. Standing up to the challenge in the face of certain death, unarmed Major Deepak Yadav  along with his buddy crawled out of the debris of their respective rooms and rushed towards three officers on one side of the guesthouse and directed them towards a bathroom located in the inner most corner of the guesthouse. Their hiding place was by then set ablaze by grenade attack and their clothing was on fire. When one of the terrorists finally blew up his suicide vest as a result of heroic act of another officer, Major Deepak Yadav exhorted the other officers to move out of the burning room. In doing so he himself sustained severe burn injuries and later succumbed to his injuries.

Major Deepak Yadav  displayed exemplary courage, grit, determination and valour beyond the call of duty and made the supreme sacrifice in the  face of a terrorist suicide bomber attack.

Father’s tribute to his son:-

“I have lost my  son but I am proud that he lost his life serving his motherland, entire country is weeping for my son”.

Rakesh Yadav, a friend of  Major Yadav paid his  tribute :

“Deepak was passionate about army uniform and he wore it till his last breath”.