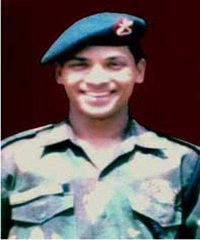 Maj Deepak Rawat hailed from New Delhi and was born on 22nd Sep 1971. He was commissioned into 65 Engineering Regiment of the Corps of Engineers, one of the oldest arms of the Indian army. After serving for few years Maj Deepak got married to Ms Anju and the couple had a daughter Lamha.  Later Maj Deepak was deputed to serve with to 3 RR battalion deployed in J&K for counter-insurgency operations.

During 2001,  Maj Deepak Rawat’s unit was deployed in  the Kashmir valley as part of Op Parakram. The AOR (Area of Responsibility) of the unit was very volatile, where many militants were active. Consequently the unit troops were engaged in operations against the militants on a regular basis. Maj Deepak Rawat was leading one such operation on 25th Jun 2001. However, during the operation Maj Deepak Rawat received  multiple gunshots and was seriously injured. He later succumbed to his injuries and was martyred. Maj Deepak Rawat was given the gallantry award “Shaurya Chakra”, for his cold courage, valour, leadership and supreme sacrifice.