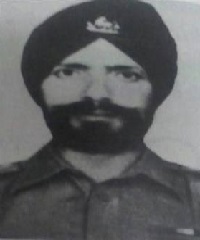 Major Darshan Singh Lalli hailed from Jalandhar district in Punjab and was born on 9th August 1925. Son of Shri Khem Singh, he joined the Army on 15th May 1950 at the age of 24 years. He was commissioned into the Dogra Regiment, an infantry Regiment well known for its intrepid soldiers and a glorious history of battle exploits.

By 1965, he had put in around 15 years of service and had been promoted to the rank of a Major. By then he had served in various operational areas and gathered substantial field experience and field-craft skills. He later joined 6 Dogra battalion which was raised at Meerut Cantonment on October 1, 1964 by Lt Col SS Khokhar. As the war clouds were gathering in 1965, 6 Dogra was was inducted in Jammu and Kashmir in April, 1965 to be a part of 68 Infantry Brigade.

Maj DS Lalli’s unit 6 Dogra, after having got deployed in J&K undertook numerous counter-infiltration operations. After anti-infiltration operations in Gulmarg, Tangmarg and Srinagar airfield areas in August, it was ordered to move to Hajipir Pass in Pakistan-occupied Kashmir. The battalion reached Hajipir pass on 03 Sep 1965 and relieved 1 Para, which had captured the Pass on 28 Aug 1965. The road from Hajipir Pass to Poonch in the south followed a nullah that joined the Batar Nullah at Kahuta. Point 7720 was located 4 km south-east of the Pass; Point 8777 lay 2 km south of the Pass; and Gitian was another 1 km ahead of Point 8777. Clearing the Hajipir Pass-Poonch Road meant clearing these areas of the enemy. By 09 Sep Point 7720 was captured and was named ‘Dogra Hills”.  6 Dogra was then tasked to capture Gitian which consisted of three features: Tree Hill, Hut Hill and Knoll. ‘B’ company commanded by Maj DS Lalli was to capture Tree Hill’; ‘C’ was to seize Hut Hill; and ‘A’ was in reserve. The Knoll was to be captured later. It was planned to be a silent attack with mortars and artillery on standby.

As planned in the night of 20th/21st Sept Maj Lalli along with his men swung into action. When his troops were 200 yards from the objective, the enemy opened heavy fire. It had also laid a minefield. The company suffered heavy casualties but pressed home the attack. There was close-quarter fight throughout the night. In spite of heavy enemy shelling and casualties in his company, Maj Lalli leading a gallant charge captured the objective. He then reorganized his position to beat back enemy counter-attack which was launched by them with nearly 250 personnel supported by heavy artillery and MMGs. Maj Lalli repulsed the attack with only 60 personnel using his great leadership quality and going from bunker to bunker to encourage his men. However, when he was reorganizing his defenses after the counter-attack, he received a burst of enemy MMG fire. Eventually the gallant soldier succumbed to his injuries and was martyred. Maj DS Lalli was a committed soldier and a gritty officer, who led his soldiers from the front and laid down his life in the line of his duty.

Maj Darshan Singh Lalli was given the gallantry award, “Vir Chakra” for his dauntless courage, leadership, devotion to duty and supreme sacrifice.

During an attack on Haji Pir pass on the night of 20th/21st September, 1965. Major Darshan Singh Lalli was assigned the task of capturing a feature, which was defeated by more than two enemy platoons. Despite heavy enemy shelling and casualties in his  company Major Lalli led a gallant charge and captured the objective and thereafter reorganised his position to beat back enemy counter-attack was launched by the enemy with nearly 250 personnel, supported by heavy artillery and MMGs, but Major Lalli repulsed the attack with only 60 personnel, he himself going from bunker to bunker to encourage his men. when he was reorganizing his defences after the counter-attack, he was killed by a burst of enemy MMG fire.

In this action, Major Darshan Singh Lalli displayed gallantry, resourcefulness and leadership of a high order.