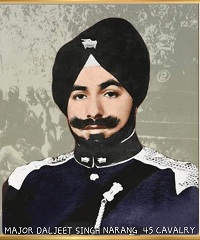 Major Daljit Singh Narag was born on May 20, 1935 in Peshawar, Pakistan. Maj Narang joined the Army on 9th December 1956 at the age of 21 years and was commissioned into 45 Cavalry, an Armoured Regiment of the Armoured Corps . The regiment was based at Kanchrapara in the 24 Parganas district of West Bengal and was equipped with Russian PT-76 amphibious light battle tanks and later with T-55 Main Battle Tanks. During 1971, Major Narag’s regiment was deployed in the eastern sector to deal with the rising threat from the then East Pakistan.

Even before the war had actually begun innumerable clashes were taking place along the border between India and Pakistan. On the eastern border, the Garibpur village was at an important crossroads and its control was vital as it included a highway to Jessore from India. On 21 November, the 14 Punjab Bn  supported by a Squadron of 14 PT-76 tanks from 45 Cavalry moved in to capture the areas around Garibpur inside Pakistani territory. The move was supposed to be a surprise, but following a skirmish with patrol troops of both armies the previous day, Pakistan had an inkling of this impending attack. Maj Narag was commanding the squadron of 45 Cavalry in that battle.

Pakistan immediately responded in numbers when its 107 Inf Bde supported by 3rd Independent Armoured Squadron, equipped with M24 Chaffees light tanks was launched. Possessing numerical superiority, Pakistan troops were in position to decimate the Indian intrusion. But the Punjab Battalion, known for its long history of valor, dug in and poised themselves for a counterattack. Retaining the Infantry in a defensive position, the tanks of C  sqn under the command of Maj Narag were sent forward to ambush the oncoming Pakistani charge. In the next couple of hours Indian troops pounded the Pakistani attack who couldn’t pinpoint the source of attacks due to poor visibility on account of fog.

The battle raged, long and furious at very close quarters. Major Narag stood on the turret of his tank, directing the operations and effectively engaging the enemy tanks despite heavy fire. Bolstered by his presence, his men fought back gallantly, inflicting severe causalities on the enemy. The Indian forces destroyed 10 Pakistani tanks, losing 3 of their own. Subsequently, 4 more enemy tanks were destroyed.  However, Major Narag was targeted by the enemy and was struck down fatally by a barrage of machine-gun fire. Maj Narag attained martyrdom atop his tank valiantly leading his troops. His indomitable courage, outstanding leadership, undeterred determination, devotion to duty and supreme sacrifice ensured successful completion of the assigned operational task.

Major Daljit Singh Narag  was given the nation’s second highest gallantry award, “Maha Vir Chakra” for raw courage, unfaltering leadership and supreme sacrifice. About the battle for Garibpur fought by Major Daljit Singh Narag’ squadron, it is said that “there are a few parallels in the history of armoured warfare where one armoured squadron was engaged & annihilated by an armoured force of equal strength at such little cost in terms of tank and personnel casualties.”

Major Daljit Singh Narag was commanding a squadron of cavalry which was attacked by two enemy battalions, supported by a squadron of Chaffee tanks. He skillfully and boldly maneuvered his squadron despite heavy enemy fire and engaged and destroyed the enemy tanks. With utter disregard for his personal safety and undeterred by heavy enemy fire, he directed the fire of his squadron standing on the turret of his tank. When one of the tanks of his squadron was hit, he immediately, at immense risk to himself, rushed to assist its crew in pulling out. His courage and fearlessness so inspired his troops that they successfully decimated the enemy squadron of Chaffee tanks and stemmed the enemy advance. Major Narag was killed atop his tank by machine gun fire while leading his squadron.

Throughout this action, Major D.S. Narag displayed outstanding leadership and determination. His conspicuous bravery, devotion to duty and supreme sacrifice is in the highest tradition of the Army.