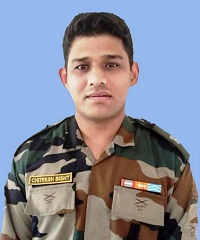 Major Chitresh Bisht was born on 01 Dec 1987 in Dehradun in Uttarakhand. Son of a retired Police Inspector Shri SS Bisht and Smt Rekha Bisht, Maj Chitresh had an elder brother Neeraj and younger sister Shruti. Maj Chitresh joined the Army through Technical Entry Scheme (TES) in 2006 and completed engineering from College of Military Engineering (CME) Pune. He was commissioned on 12 June 2010 form IMA Dehradun into 55 Engineering Regt of the Corps of Engineers. One of the oldest arms of the Indian Army, the Corps of Engineers consists of three major constituents namely Combat Engineers, MES and Border Roads. The Corps also provides officers to the Military Survey and Defence Research & Development Organization. In war, Combat Engineers provide mobility to own forces by constructing bridges, tracks, and helipads; on the other hand, the Corps denies the same to the enemy by creating obstacles such as laying mine-fields and demolition of bridges.

Maj Chitresh Bisht was a Combat Engineer trained in laying and defusing mines and had undertaken numerous risky operations. During 2019 he was serving with 55 Engineering Regt and was operating as Bomb Disposal Squad leader in support of the unit’s operations.

During 2019, Maj Chitresh Bisht’s unit was deployed in Naushera sector of Rajouri district in Jammu and Kashmir. The unit was manning the forward posts along the LOC in Rajouri district. As the area of his unit’s operation was very volatile and prone to infiltration by militants, the unit had to maintain a strict vigil at all times and deployed armed patrols with regular frequency. The landmines along the patrol routes posed a serious danger to the troops and thus the Bomb Disposal Squad of the unit played a crucial role in sanitizing the routes. Maj Chitresh Bisht as leader of the squad was involved in numerous mine clearing operations for the unit.  On 16 Feb 2019, Maj Bisht was tasked to lead one such mine clearing operation in Laam sector of Naushera in Rajouri district.

At about 3 pm on 16 Feb, mines were detected on the Naushera track and Maj Bisht leading the Bomb Disposal Squad, got down to the task of sanitizing the track. He successfully defused one of the mines and with utter disregard to his own life, Maj Bisht continued to carry out the area sanitation and proceeded to neutralize another mine. However, while trying to deactivate the mine, the device got activated, triggering a blast. Maj Bisht facing the brunt of the blast absorbed most of the splinters, thereby screening his comrades behind him. Maj Bisht later succumbed to his injuries and was martyred. Maj Chitresh Bisht was slated to get married on 07 Mar 2019 but was more devoted to the higher cause of serving the motherland and laid down his life in the service of the nation at the age of 31 years. Maj Chitresh Bisht was given the gallantry award, “Sena Medal” for his admirable courage, devotion to duty and supreme sacrifice.

Shruti, sister of Major Chitresh Bisht paid tribute to him on the 2nd anniversary of his “Day of Martyrdom” …

I never knew that there would come a time when he wouldn’t be physically present with us. It still gives me chills and tears come rolling down my cheeks to remember that day. Who would have thought that he wouldn’t be around; ‘Our beloved hero and the sunshine of the house’ won’t be there with us.

Its been two years since he left for the heavenly abode and changed the life of everyone in the family. I cannot recall a single day wherein Mummy and Papa don’t think about him. There is always sadness in their eyes when they talk about that day but when we start sharing his memories and talk more about him, the sadness give way to a slight smile for a while. I guess that’s the aura he had and he will always have that made people smile even when they don’t want to. He gave us a lot of memories to live with but we still crave for more.

He was a lively person and always went beyond the call of his duty. He always lived his life on Chetwode credo, his own ease, comfort and safety came last, always and every time. In his life, he always made sure that there was a part of his passion in every activity. When he bought his first car he took the number of the vehicle as 7055 ; 70 was part of his company’s name and 55 was part of his regiment’s name; that was his love and dedicated for his Regiment .. It is rare to find a person like him.

I know he is watching over us always and silently cheering us, in everything we do. There isn’t a moment, when he is not missed and we know that the pain of him not being around with us is lifelong. But we are immensely proud of him and he will continue to live in our memories and guide our deeds as well.