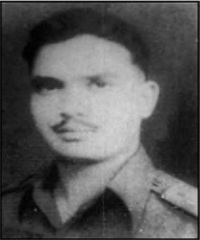 Major B K Pant since his childhood wanted to follow in the footsteps of his father and serve in the armed forces. Son of an army veteran Subedar Bhagirath Pant, he followed his dream and eventually got selected to join the Army. He was commissioned into 2 Rajput of the famed Rajput Regiment, a regiment known for its valiant soldiers and numerous battle honours.

After being commissioned into an infantry regiment, he soon gathered expertise in the field craft skills and evolved into a committed soldier. By the year 1962, he had served in various operational areas and had been promoted to the rank of Major. Maj BK Pant developed into a fine officer, who commanded great respect of his juniors and peers as well.

With the rising tensions with China on the North Eastern border Maj B K Pant’s unit under the command of Lt Col Maha Singh Rikh was moved to the banks of the Namka chu river by October 10 1962, as a part of 7 Infantry Brigade. The brigade was stretched on a twelve-mile front along the Namka Chu, with the marching time from one end to the other being five days. The battalion was deployed in a trackless wilderness, where no mules could go and no civilian population lived which could help logistically. The shortage of winter clothing added to the hardships of the troops but they rose to the occasion and showed exemplary courage in the days to follow. By the time the fighting commenced, the Chinese had occupied all the dominating heights in the area. The Chinese troops launched a massive assault on the 2 Rajput front and in the fierce fighting that ensued, the battalion repulsed a number of determined attacks. Maj Pant who was commanding one of the companies faced one of the fiercest attacks.

On 21 Oct 1962, Maj Pant’s company held fast against three waves of Chinese assaults and suffered heavy casualties. Maj Pant himself was wounded in the stomach and legs, but in a rare show of courage and leadership he continued to inspire his men, exhorting them to fight till the last man. The Chinese sensing that their obstacle in advancing lay with Maj Pant, brought a volley of machine gun fire on his position. Maj Pant was seriously injured and collapsed proudly shouting the Rajput Regiment’s battle-cry: “Bajrang Bali ki Jai.” His last words to his troops were truly inspiring wherein he said,  “Men of the Rajput Regiment, you were born to die for your country. God has selected this small river for which you must die. Stand up and fight like true Rajputs”. In Maj Pant’s company out of 112 men, 82 got killed or wounded in action. Maj Pant displayed extraordinary grit and gallantry and made the supreme sacrifice in the service of the nation like a true soldier.

Maj BK Pant’s son Mukul Raj Pant also joined the Army and continued the legacy of serving in the armed forces. When Maj BK Pant’s grand son, Sub Lt Vivek Pant joined the Indian Navy in the year 2014, he became the fourth generation military officer of the family. Maj BK Pant was a gallant soldier and an officer par excellence, who led from the front and laid down his life following the highest traditions of Indian Army. Inspired by Maj BK Pant, his family continues to serve the nation in uniform and carry forward his legacy with immense pride.