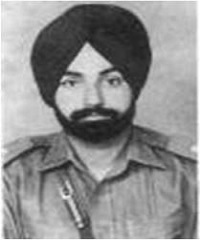 Major Bhupinder Singh hailed from Harnampura village in Ludhiana district of Punjab and was born on 19th September 1928. Son of Shri Sajjan Singh, Maj Bhupinder joined the army after completing his education. He was commissioned into the Hodson’s Horse on 11th December 1949 at the age of 21 years. By the year 1965, he had been promoted to the rank of Major and had put in over 15 years of service. By then, Major Bhupinder Singh had developed into a committed soldier and gritty officer, who always believed in leading from the front. During the 1965 Indo-Pak war, Major Bhupinder Singh’s unit got deployed in the Punjab sector.

The battle of Phillora was one of the largest tank battles fought during the Indo-Pak war. It was the first major engagement between the two nations in the Sialkot sector. The battle started on 10 September, when Indian troops launched a massive attack at the Phillora sector. Its 1st Armoured Division was on the offensive in that area. Equipped with four armoured regiments, this division faced stiff opposition from the Pakistani 6th Armoured Division. Pakistani air attacks did little damage to the tank columns and more to lorry and infantry columns. For the next two days, intense fighting continued and the outnumbered Pakistani troops made a tactical retreat towards Chawinda. By this time Indian troops had destroyed 67 Pakistani tanks.

During this time Maj Bhupinder Singh was commanding the squadron  ‘B’ of 4 Horse which was deployed to cut the enemy line of along road Gadgor-Phillora and provide a fire base for attack on Phillora. Major Bhupinder Singh led his squadron with distinction in the battle of Phillora and his squadron was able to cause large-scale destruction of Pakistani tanks and other equipment. Maj Bhupinder also played a key role in the subsequent "Battle of Sodreke" on 19 September. With skillful deployment and bold action, his squadron proved its mettle and changed the course of the battle in India’s favour.

Although Maj Bhupinder’s tank was hit on several occasions, he continued to remain in effective command and by several acts of personal gallantry inspired his men to fight courageously. In one of the attacks, though his tank was damaged he bailed out safely but went back to save one of his comrades, displaying a high degree of gallantry, camaraderie and leadership. However on 19th September which happened to be Major Bhupinder Singh’s  birthday, his tank got hit by an  enemy Cobra missile during the battle and caught fire. He had destroyed four enemy tanks by then. The missile hit resulted in a devastating fire that engulfed the tank completely. The driver of the tank was 'killed in action' on the spot and Major Bhupinder Singh and his gunner Sowar Vir Singh suffered grievous injuries. They were evacuated to the near by medical facility and later shifted to the Military Hospital Delhi. Sowar Vir Singh later recovered but Maj Bhupinder subsequently succumbed to his injuries on 3rd October 1965. Major Bhupinder Singh displayed outstanding courage and leadership during the operation and laid down his life in the service of the nation.

Major Bhupinder Singh of Hodson’s Horse led his squadron with distinction in the battle of Phillora and Sodreke in Pakistan between 11 and 19 September With skillful deployment and bold action, his squadron was able to cause large-scale destruction of Pakistani tanks and other equipment. Although his tank was hit on several occasions, he continued to remain in effective command and by several acts of personal gallantry inspired his men to fight courageously. On 19 September in the battle of Sodreke his tank was hit and caught fire. While abandoning the tank he was burnt severely and though evacuated subsequently died.

Major Bhupinder Singh displayed great determination and courage under heavy enemy fire by continuing to fight with only two tanks after most of his tanks had been disabled. He had set an inspiring example of personal sacrifice and bravery in the best traditions in the Indian Army.

When then Prime Minister Lal Badur Shastri accompanied by his son Shri Sunil Shastri  went to meet Major Bhupinder Singh in hospital, he had tears in his eyes. When Prime Minister asked why “Tears in such a brave man’s eyes”,  Major Bhupinder Singh replied  “Not because of pain, its because my  PM is standing before me and I can’t even salute him".