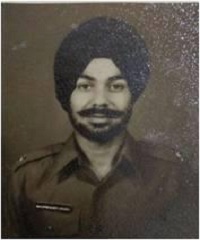 Major Bhupender Singh was born in Pilani in Rajasthan. He was commissioned into 64 Engr Regt of the Corps of Engineers, one of the oldest arms of Indian army. The Corps of Engineers consists of three major constituents namely Combat Engineers, MES and Border Roads. The Corps also provides officers to the Military Survey and Defence Research & Development Organisation. During 1994, Maj Bhupender Singh was serving with the Border Roads and was posted in J & K.

After serving for few years, Maj Bhupender got married to Ms Avinash Kaur and the couple had two daughters, Nimrat Kaur and Rubina Singh. His elder daughter Nimart Kaur is now an acclaimed actor.

Major Bhupender Singh was serving with the Border Roads in Verinag in J & K area in 1994. Since it was a field station his family continued to stay in Patiala, his old place of posting. During Jan 1994, when his family was visiting him in winter vacation, the Kashmir separatists belonging to Hizb-ul-Mujahideen group kidnapped Maj Bhupender Singh from his place of work, on 17 Jan 1994. They made some ridiculous demands of some terrorists to be released that Maj Bhupender did not agree to.  Consequently, Maj Bhupender Singh was killed by the kidnappers, in retaliation to denial of their demands on 23 Jan 1994.

Major Bhupender Singh besides being brave and intelligent, was a committed soldier who upheld the traditions of the Indian army at the cost of his life. Maj Bhupender Singh was given the gallantry ward “Shaurya Chakra” for his commitment, bravery and service to the nation. Ironically the gallantry award was given on 13 Mar, the birthday of his daughter Nimrat Kaur.

A Daughter’s tribute to her father:

In an interview to the TOI Maj Bhupender Singh’s elder daughter Nimrat Kaur paying tribute to her father said, “My life changed after my father’s death. It was not a financial threat. But that life that I had lived with those orderlies, those army cars went away overnight. It was difficult moving to civilian life. In the army, you are living in a shell and that’s why my father never sent me to an army school. You are used to three sevadars around you and suddenly, there are no army get-togethers, so to just adjust to the new life without any fauji kids for friends was tough. I was undergoing puberty that time and that compounded my agony. But the army stands by you like a rock. They are your family and even today, they will come at the drop of a hat if you need something and they will do anything for you. I also think it’s to do with my father’s goodwill and his relationship with people. Coincidentally, he got awarded the Shaurya Chakra on my birthday, March 13. (His name is now written as Bhupender Singh SC, SC standing for Shaurya Chakra).

I remember my The Lunchbox premiered in Cannes and I immediately went back to Kashmir in June for the first time after my father’s death. I could sense that my life was going to shift in a big way and I wanted to go back to Kashmir for my closure and I did. I spent 10 days there all alone. I went to Verinag ( there’s a point there dedicated to my father). I came back and got a tattoo done on my wrist which reads, ‘Zenab’, meaning a father’s precious jewel that brings glory to his name”.