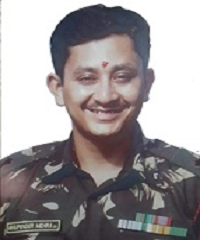 Place of Birth : Lucknow (UP)

Major Bhupender Mehra, born on 2nd Oct 1976  hailed from Lucknow in Uttar Pradesh. Son of an Air Force veteran Wg Cdr DS Mehra and Smt Geeta Mehra Kaur, Maj Bhupender Mehra was commissioned as an officer on 11 Dec 1999. He was commissioned into the Regiment of Artillery an important combat arm of Indian Army known for its booming field guns.

After serving for a couple of years with his parent unit Maj Mehra was deputed to serve with 43 Assam Rifles deployed in Manipur for counter-insurgency operations. By 2009, Maj Mehra had put in about 10 years of service and evolved into a committed soldier and an officer par excellence, who commanded the respect of his peers as well as men under him. Besides being a soldier at heart, he was a proud “Gunner” too as the soldiers from his Regiment are called. He got married to Manisha in the year 2003 on 25th January, and the couple had a son, Pratham.

During 2009, Maj Bhupender Mehra was serving with 43 Assam Rifles on deputation and the unit was deployed in the militant-infested area of Manipur. The unit was engaged in operations against the militants on a regular basis and was required to maintain a high state of alert all the time.  On 23 Nov 2009, Maj Bhupender Mehra was leading a column of his unit comprising two officers, 01 Junior Commissioned Officer and 30 soldiers on an area domination move. When Maj Bhupender Mehra’s convoy reached Dingpi area in Chandel  district of Manipur, it was suddenly attacked by  the militants of Manipur People’s Army (MPA), an armed wing of the UNLF( United National Liberation Front (UNLF), also known as the United National Liberation Front of Manipur an  insurgent group active in Manipur).

The militants were heavily armed with automatic weapons and carried out the attack in a pre-planned move from vantage points to cause maximum causalities. Though the attack was sudden, Maj Bhupender Mehra with his troops swung into action to counter the attack and a fierce gun battle ensued thereafter. However, Maj Bhupender Mehra and four other soldiers including Asst Comdt Ramendra Kumar, Hav Bipin Singh Parmar, Rifleman Narayan Singh, and Rifleman Ajay Kumar sustained grievous injuries and succumbed to their injuries. Maj Bhupender Mehra was a valiant soldier and a fine officer who laid down his life in service of the nation following the highest traditions of the Indian Army.