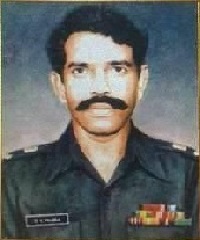 Place of Birth: Agra (UP)

Major Bhukant Mishra was born on  15 June 1941 in the village  Nowbasta Talipara, of Agra in Uttar Pradesh. Son of Shri B L Mishra, Maj Bhukant was commissioned into 15 battalions of the Kumaon Regiment on 04 Apr 1970.

The terrorism was at its peak in Punjab during 1984, and the terrorists had captured the sacred Golden Temple in Amritsar. A decision was taken by the Indian Government to launch a military operation to evacuate the temple and this operation was code-named  as Op Blue Star.

On  06 June 1984, a Company commanded by late Major Bhukant Mishra was tasked to clear a temple complex. The Complex was very heavily fortified and was converted into impregnable bastion. Earlier attempts to clear the building during the night had suffered very heavy casualties. At 0440 hours one company led by Major Bhukant Mishra advanced behind an Armoured Personnel Carrier, which was soon hit by anti-tank gun fire. At the same time the company came under very heavy fire and suffered eight casualties, including the JCO of the leading platoon.