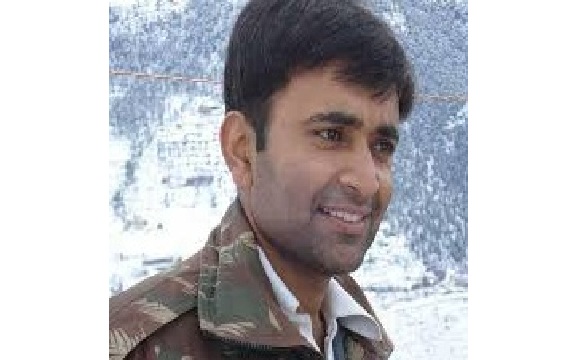 Major Bhanu Pratap Singh hailed from Lohsana Bada village in Churu district of Rajasthan. Son of Shri RS Rathore a police officer and Smt Padma Kanwar, he was passionate about the Armed Forces since his childhood. He continued to follow his dream and eventually got selected to join the Army after passing the Combined Defence Services Examination. He got commissioned in the year 2001 at the age of 22 years. He was commissioned  into 8 Raj Rif of the Rajputana Rifles, the well-known infantry Regiment of Indian Army.

The young Lt Bhanu Pratap Singh was proud to be part of Rajputana Rifles Regiment and believed in its motto Veer Bhogya Vasundhara (वीर भोग्य वसुंधरा ) meaning “The Brave Shall Inherit the Earth”. After joining his unit, he soon honed his field craft skills while taking part in various operations. After serving for few years, he got married to Dr Sarika and the couple had a son Rudra Pratap. Later he was deputed to serve with 43 RR battalion, deployed in J&K for counter-insurgency operations. By the year 2008, he had put in around 7 years of service and had been promoted to the rank of Major.

During 2008, Maj Bhanu Pratap Singh’s unit 43 Rashtriya Rifles was deployed in Rajouri district of J&K. The unit troops were engaged in counter-insurgency operations on a regular basis as its AOR (Area of Operation) was affected by active militancy. Maj Bhanu Pratap’s unit also undertook operations to check the infiltration bids as its AOR was prone to infiltration by the militants from across the border. On 19 July 2008, the security forces received credible information from the intelligence sources about the presence of terrorists in Kunda area of Thana Mandi Tehsil. Based on the intelligence inputs 43 RR along with the Special Operation Group of J & K Police launched a search and destroy operation.

The joint assault team led by Maj Bhanu Pratap Singh reached the suspected area and launched the operation. Soon the troops made contact with the terrorists and cornered them. On being challenged the terrorists opened fire and a fierce gun battle ensued thereafter lasting for several hours. However, during the heavy exchange of fire, Maj Bhanu Pratap got severely injured. He later succumbed to their injuries and was martyred. Maj Bhanu Pratap was a valiant soldier and a fine officer who led from the front and laid down his life in the service of the nation, following the highest traditions of the Indian Army. Maj Bhanu Pratap Singh was given the gallantry award, “Sena Medal” for his exceptional courage, devotion to duty, and supreme sacrifice.