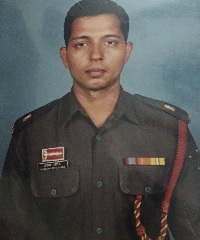 Major Avinash Singh Bhadauria, was born on December 14th, 1971 in Kanpur, Uttar Pradesh. Though he was the son of a prominent political leader in Uttar Pradesh Ganga Singh Bhadauria, he showed no inclination to join politics. Instead, since childhood, he had a passion for armed forces and always wished to join the Indian Army. In 1990, Maj Avinash joined the prestigious National Defence Academy, Khadakwasla, Pune to fulfill his dream. During his time at the NDA, Major Avinash Singh Bhadauria received the award of  “Battalion Cadet Captain ” and was always an outstanding performer, excelling at his training courses.

Major Avinash Singh Bhadauria was then commissioned into 18 Madras of the Madras Regiment. Subsequently, keeping in view his training profile, he was posted at Hathigarh, a Naxalite affected area in Assam, and then to Jamnagar in Kutch near the Indo-Pak border in Gujarat.  Thereafter, he was deputed to serve with 8 Rashtriya Rifles battalion, engaged in counter insurgency operations in J & K.

Maj Avinash got married to Shalini in 1997, who also joined the army later and served in the rank of Captain.

On September 28, 2001, Maj Avinash’s unit had received specific information from intelligence sources about the presence of some hardcore terrorists in Doda district of J & K. A decision was taken to launch a search and destroy operation to engage the terrorists under the leadership of Maj Avinash. Maj Avinash quickly assessed the situation and made out an operational to nab them. He then along with his troops swung into action and cordoned off the suspected area of the hideout.

Maj Avinash and his men soon spotted the militants, who started firing at them on being challenged. A fierce gun-battle followed and Maj Avinash fought gallantly, taking the lives of four terrorists single-handedly. However, Maj Avinash got injured in the exchange of fire and was martyred. The brave 29-year-old soldier fought till his last breath, before succumbing to his injuries. Inspired by Maj Avinash’s gallant leadership and offensive spirit, his troops successfully eliminated the terrorists and achieved the objective of the operation.

Major Avinash Singh Bhadauria was awarded India’s second highest gallantry award during peace time “Kirti chakra” on 26 January 2002, for the display of exceptional valour in the presence of the enemy.  Major Avinash Singh Bhadauria fought the terrorists gallantly till his last breath, displaying outstanding courage and utter disregard to his personal safety, before making the supreme sacrifice for the nation.

Major Avinash Singh Bhadauria was always remembered by his fellow course mates as an outstanding performer,excelling in all his training courses.  His best friend, Amit Nigam, a fighter pilot in the Indian Air Force, described the brave officer as, ” An active and bold man. Avinash was liked by all the instructors during the training course. He always stood first in his courses and was very helpful. He had a zest to end terrorism in the country. “
Nigam also said that Avinash had won the award of battalion cadet captain’ during the course and was liked by all the instructors during the training courses. Although Nigam opted for the air force and Avinash opted for the army, both remained good friends. Nigam said, “I have lost my best friend, but I still can’t believe that he is no more”.

From Martyr’s wife to Army Officer to Mrs India 2017: A tribute to Maj Avinash  Bhadauria

The former army captain and mother to a 16-year-old was crowned ‘Classic Mrs India  Queen of Substance’ for 2017. This was a tribute to her husband Maj Avinash Bhadauria by Shalini Singh, who graduated from a martyr’s wife to the queen of substance. In 2001, Shalini’s world had changed forever when her husband, Major Avinash was martyred in an encounter with terrorists in Kashmir. The brave 29-year-old soldier had eliminated four terrorists before succumbing to his wounds. Her married life was short-lived and Shalini fondly remembers the rare phone calls that were the only communication between them for days. She waited desperately for those phone calls, until the one that came early morning on the 28th of September, 2001, ruthlessly turned her whole world upside down. At 23, Shalini found herself widowed. Her 2-year-old son had lost his father.

But then she saw her son, blissfully unaware of the tragedy that had shaken their home, too young to understand the loss of pain. She knew she had to be strong for him. So she decided to join the Army. Her husband’s colleagues warned her of the mental and physical challenges of the job, especially with her toddler wholly dependent on her. But she was ready to do whatever it took.   Finally, on the 7th of September, 2002, twenty days short of her husband’s first death anniversary, she was commissioned as an Officer in the Indian Army. “For a young single mother working in a mostly male-dominated environment, life had many challenges too.” Yet with each passing day, she found the courage to go on. She served in the army for 6 years, before resigning to give her son a more settled life.   On the 14th of April, 2017, Capt Shalini was crowned ‘Classic Mrs India 2017 Queen of Substance’ at New Delhi. It was a day of reckoning for a martyr’s wife. She had picked up pieces from her battered life to transform into a woman of substance to lead a life of pride and dignity.   This is the best tribute a martyr’s wife could have given to her husband.