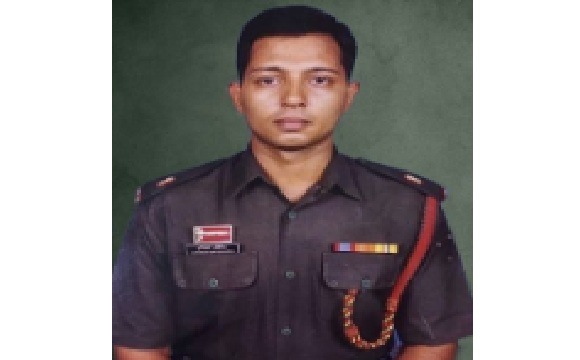 Place of birth : Kanpur, UP

Major Avinash Singh Bhadauria, was born on December 14th, 1971 in Kanpur, Uttar Pradesh. Son of a prominent political leader in Uttar Pradesh Shri Ganga Singh Bhadauria and Smt Aruna Singh, he had a brother Amit Singh as his sibling. Though coming from political family, he showed no inclination to join politics. Instead, since childhood, he had a passion for the armed forces and always wished to join the Indian Army. Following his passion, he got selected to join the prestigious National Defence Academy, Khadakwasla, Pune in the year 1990.  During his time at the NDA, he received the award of  "Battalion Cadet Captain " and was always an outstanding performer, excelling in all aspects of training.

He later moved to IMA Dehradun for further training and passed out as a Lieutenant in June 1994.  He got commissioned into 18 Madras of the Madras Regiment, an infantry Regiment well known for its fearless soldiers and numerous bold operations. As a first assignment after commissioning, he was posted to Hathigarh, a Naxalite-affected area in Assam, and then to Jamnagar in Kutch near the Indo-Pak border in Gujarat.  Besides being a soldier at heart, he was a keen sportsman and specially excelled in shot put and discus throw. After serving for sometime, he got married to Ms Shalini in 1997 and the couple had a son Dhruv. Thereafter, in the year 2000, he was deputed to serve with 8 Rashtriya Rifles battalion, engaged in counter-insurgency operations in J & K.

During Sep 2001, Maj Avinash's unit 8 RR was deployed in J&K for counter-insurgency operations. As the area of responsibility of the unit was insurgency prone area, the troops had to maintain a very high level of alert at all times. Maj Avinash had taken part in a number of operations in his stint of around one and half years with the battalion. On 28 Sep 2001, the unit received specific information from intelligence sources about the presence of some hardcore terrorists in Doda district of J & K. A decision was taken to launch a search and destroy operation to engage the terrorists under the leadership of Maj Avinash. Maj Avinash quickly assessed the situation and made out an operation to nab them. He then along with his troops swung into action and cordoned off the suspected area of the hideout.

Maj Avinash and his men soon spotted the militants, who started firing at them on being challenged. A fierce gun battle followed thereafter and Maj Avinash in a tactical move deployed his troops to hem the terrorists in.  Maj Avinash leading from the front, fought gallantly, and managed to eliminate three terrorists single-handedly. However, during the exchange of fire Maj Avinash too  received gunshots and got seriously injured.  He later succumbed to his injuries and was martyred. Inspired by Maj Avinash's gallant leadership and offensive spirit, his troops successfully eliminated the remaining terrorists and achieved the objective of the operation. Maj Avinash Singh was a brave and committed soldier, who laid down his life at the age of 29 years in the line of his duty, living up to the highest traditions of the Indian Army. Maj Avinash Singh Bhadauria was given the nation's second highest peacetime gallantry award "Kirti Chakra" for his outstanding leadership, unfailing courage and supreme sacrifice.

Life turned blissful for Shalini, when she got married to then Capt Avinash Singh Bhadauria in 1997. Though she was just 19 years at that time, she soon adapted to the Army life and felt indeed proud to be a member of the large Army family.  The arrival of their son Dhruv brought added happiness in their lives. But on 28 Sep 2001, her destiny suddenly turned hostile, when she lost her husband, while he was leading a counter-insurgency operation in J&K.  The world came crashing down for her and the life suddenly lost meaning for her.  She felt distraught, angry and terribly worried about her future and that of her son.

But she was a woman of strong will and determination. She took the tragedy in her stride and decided to take life head on. She decided to join the Army like her husband and started preparing for SSB. With her outstanding perseverance and encouraged by her wellwishers, she cleared the Service Selection Board (SSB) interview in 2001.  She knew about the mental and physical challenges of the job, especially with her toddler being wholly dependent on her, but she was ready to do whatever it took.  Finally, on the 7th of September, 2002, twenty days short of her husband’s first death anniversary, she was commissioned as an Officer in the Indian Army. During the training at OTA, she excelled in all aspects of training and won praise from all quarters for her commitment and grit.

It was not easy for her to work in a mostly male-dominated environment, yet with each passing day, she found the courage to go on and served in the army for 6 years, before resigning to give her son a more settled life.   On the 14th of April, 2017, Capt Shalini was crowned ‘Classic Mrs India 2017 Queen of Substance’ at New Delhi. It was a day of reckoning for her as she had picked up pieces from her battered life to transform into a woman of substance.  Later she became the first Indian to represent the country in a beauty pageant (Ms. Earth in the USA) in the single-parent section.  Subsequently she went on to gather many laurels including the Veer Nari Samman by Govt of India, EPIC Award 2018, citations of honors by Lions Clubs, and All India Achievers award.

Today, she continues to work in different capacities to help people with physical and emotional wounds. From slum children and war widows to cancer support, animal welfare, and people with disabilities, she is associated with many social causes. From losing her husband at the age of 23 to pushing herself to become an Army officer and then winning many coveted awards,  Capt Shalini’s struggle and never-say-die attitude will continue to inspire women for many years to come.