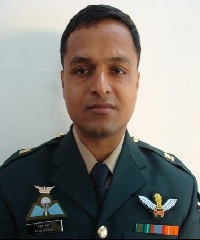 Major Atul Garje hailed from Nandur Nimba village in Ahmednagar district of Maharashtra. He initial schooling was in a local Marathi medium school but he later joined the Sainik school at Satara, where the foundation of his future military career was laid. Besides academics, Maj Garje excelled in sports too and was awarded the Governor’s Gold Medal for his overall performance in the school. Later he joined the prestigious NDA and then IMA Dehradun. He was commissioned into the Regiment of Artillery and achieved the distinction of being the first person from his village to become an officer in the Army.

After serving for a few years he topped the Flying instructor course and became the youngest instructor pilot in the year 2010. Besides being a competent pilot, Maj Atul Garje was an excellent squash player and a mountaineer too. A committed soldier and a fine officer he was respected by his peers and juniors as well. He later got married to Ms Harshala and the couple had a daughter in Oct 2010. A die-hard soldier at heart  Maj Atul Garje would often say, “even if I die, my soul will come back to Army”.

During Feb 2011, Maj Atul Garje’s unit was participating in the war game exercise Vayu Kaushal. As part of the exercise, Maj Atul Garje along with his co-pilot Maj Bhanu Chander were tasked for an air operation on 2nd Feb 2011. As per the plan they took off from Army Aviation Base, Nasik, but soon experienced an aircraft emergency over a built-up area, necessitating an immediate force landing. Maj Atul Garje and Maj Bhanu Chander had only a few seconds to decide the course of action and they decided to maneuver the aircraft away from the built-up area. With exceptional flying skills and utter disregard to their own safety, they maneuvered the helicopter away from civilian habitat and ensured no loss to civilian life and property.

However, in the process of recovery, the helicopter impacted the ground and crash landed. Maj Atul Garje and Maj Bhanu Chander got grievously wounded and succumbed to their injuries. Their courageous action at the cost of their lives not only saved many human lives but also averted a major disaster as various military ammunition stores were located in that area. Maj Atul Garje was a gallant and dedicated soldier who laid down his life in the service of the nation. Maj Atul Garje was given the gallantry award, “Sena Medal” for his exceptional courage, professionalism, devotion to duty and supreme sacrifice.

Maj Atul Garje is survived by his wife Smt Harshala Garje and a daughter.

Citation for the Sena Medal awarded to him reads :-

Major Atul Garje and Major Bhanu Chander as part of an Exercise were carrying out flying operation to rehearse Indian Army war plans.  On 02 February 2011 at about 0848 hours, soon after take off from Army Aviation Base, Nasik, the pilots experienced an aircraft emergency over a built-up area, necessitating an immediate force landing. With exceptional flying skills, following the highest traditions of the Indian Army and selflessness, with utter disregard to their own safety, they manoeuvred the helicopter away from civilian habitat and ensured no loss to civilian life and property. In the process of recovery, the helicopter impacted the ground and crash landed which resulted in the loss of their lives.  Unmindful of their personal safety, the officers have displayed indomitable spirit, boundless courage and exceptional degree of professionalism by their valiant act of selflessness in the duty to the nation.

The  batchmates of Major Atul Garje SM have funded & sponsored a well equipped conference hall in his name at the school.