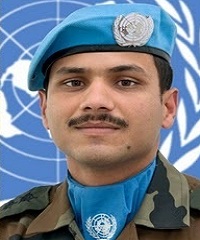 Major Ashish Kumar Roy was born on Feb 10, 1982 in Patna, capital of Bihar in a very respected and educated family. Son of a well-known child specialist in Barauni Dr. S R Roy and Professor Smt Roy, He finished his senior secondary schooling from Kendriya Vidyalaya, Hindustan Fertilizer Corporation (HFC) Barauni in the year 2000. He was inclined to join the Armed Forces since his younger days and eventually got selected to join the Amy after completing his school studies. He joined IMA, Dehradun and then CTW, CME, Pune for B.Tech in Mechanical Engineering. He was brilliant in academics and remained among top performers in all the academic courses.

He got commissioned into 19 Engr Regt of the Corps of Engineers, one of the oldest arms of Indian Army. The Corps of Engineers consists of four major constituents namely Combat Engineers, MES , Border Roads and Military Survey. He got trained as a combat Engineer. As a young lieutenant, he got posted to 11 Corps/19 Engineer Regiment at Jalandhar in 2006. Later he got posted to the North East to 17 Mtn Div/ 19 Engineer Regiment in Sikkim. In the year 2009, he was deputed to serve with 12 RR battalion deployed in J&K for counter-insurgency operations. In the same year he got selected to serve as part of Indian contingent in UN peace keeping operation (UNDOF) in Golan Heights in Syria.

After his tenure with the UN Peace Keeping Force, he was once again deputed to serve in J&K with 54 RR battalion in 2010.  During his serve career, he was awarded numerous medals and decorations like Uccha Tungata Padak, Special Service Medal with Clasp ‘OP RAKSHAK III’, United Nations Medal, Videsh Seva Medal, Numeral 2 to UN Medal, and Sainya Seva Medal with Clasp (J&K).

During 2012, Maj Ashish K Roy, was serving with his parent unit and was posted at Meerut. The operational role of his Regiment was to provide mobility to own forces by constructing bridges, tracks and helipads and on the other hand deny the same to the enemy by creating obstacles such as laying mine-fields and demolition of bridges. The role demanded continuous training of troops on various operational activities. Maj Ashish K Roy was assigned the task of leading one such training schedule for bomb disposal in Dec 2012.

On 03 Dec 2012, Maj Ashish was leading a training session in bomb disposal at Babina Range, near Jhansi. As the session was underway, one of the bombs failed to go off. After waiting for some time, Maj Ashish led a team to inspect the bomb. However, unfortunately, the bomb exploded as soon as Maj Ashish along with the team reached near to it. Maj Ashish got severely injured in the explosion and later succumbed to his injuries. Maj Ashish Kumar Roy was a gallant soldier and a gritty officer who led from the front and laid down his life in the line of his duty.

“A mechanical engineer by qualification, but doing radically different things every day.  Luv my Nation, my Family, my Friends n just trying to b a good human being”