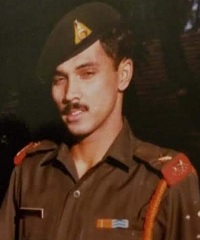 Maj Ashish Bhatnagar hailed from Moradabad in Uttar Pradesh and was born on 15th August 1967. Son of Shri KK Bhatnagar and Smt Sudha Bhatnagar, he was inclined to join the Army since his younger days. While growing up, he continued to follow his dream and eventually after completing his school education, got selected to join the prestigious NDA. He later joined the Indian Military Academy Dehradun and was commissioned into 6 Sikh LI battalion of the Sikh Light Infantry Regiment, an infantry Regiment known for its fearless soldiers and various battle exploits.

Besides being good in academics, Maj Ashish Bhatnagar had keen interest in sports too. He excelled in various outdoor games and won many laurels in athletics, Basket Ball, Tennis, Squash, and Badminton. He became proficient in Golf too and amazed everyone by getting a remarkable “hole-in-one” in a Golf Tournament. He also functioned as an Instructor at  Commando Wing and was known to have aced the daredevil Jump, which was an 80 ft jump into the water.

During 1997, Maj Ashish Bhatnagar’s unit was deployed in Pathankot area in Punjab. During an operation on 16th August 1997, Maj Ashish was on operational duty in the sensitive Lasian Enclave Gurdaspur near Indo-Pak border. At about 1745 hours, during an operational mission the boat carrying Maj Ashish and his nine comrades capsized in Ravi River. Utilizing his superior commando skills and displaying raw courage, Maj Ashish immediately leapt into the strong current to save his comrades. He gave his own life jacket to another officer and then rescued him from near death situation. Not stopping at that , Maj Ashish with electrifying speed and utter disregard to personal safety rescued another drowning soldier along with his weapon.

Owing to the ongoing rainy season, the river had muddy water and strong undercurrent making the rescue operation more risky. But Maj Ashish steadfastly continued the rescue effort to save others till he himself got trapped in strong undercurrents. He embraced a hero’s death while keeping the safety of his comrades uppermost in his mind. His last words, “hold on, you will be rescued” and “do not follow me, undercurrents here are very dangerous” spoke volumes of his camaraderie, gallantry and devotion to duty. Maj Ashish Bhatnagar was given the gallantry award, “Shaurya Chakra” for his conspicuous bravery, exemplary courage and supreme sacrifice for his comrades.

During an operation on 16th August 1997, Major Ashish Bhatnagar was on operational duty in the sensitive Lasian Enclave Gurdaspur near Ravi river on Indo-Pak border. At about 1745 hours, during an operational mission the boat carrying officer and his nine comrades capsized in Ravi River. A commando instructor with reputation, instinctively leading from front, Major Ashish Bhatnagar leapt into the strong current and gave his own life jacket to another officer and then rescued him from impending death. Again with electrifying speed with utter disregard to personal safety Major Ashish rescued another drowning soldier along with his weapon from the strong undercurrent and steadfastly continued the rescue effort to save others till he himself was trapped in strong undercurrents. While embracing a hero’s death, the safety of his comrades was the uppermost in his mind his last words being “hold on, you will be rescued” and “do not follow me, undercurrents here are very dangerous”